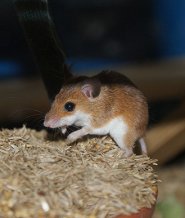 The African Pygmy Mouse is found south of the Sahara in Africa. These animals are native to South Africa, Swaziland, Malawi, Angola, Zambia, Zimbabwe, and Mozambique, although they may sometimes be found in the surrounding countries as well. Within this range they are most often found in grassy areas near a water source.

These animals are best known for their small size. African pygmy mice can be five to seven centimeters, two to two-point-eight inches, long including their tail, which is usually as long if not longer than the body of the mouse. The bodies of these mice are typically two to two and a half centimeters, about an inch, long. They can weigh from three to twelve grams, or eleven hundredths to forty-two hundredths of an ounce. Females are usually a little larger that the males. African pygmy mice have a mostly reddish brown coat with a white underside.

African Pygmy Mice are predominately nocturnal but are sometimes active during the day as well. These animals are extremely active and are known to consume a relatively large amount of water for their size. They are omnivorous and those kept in captivity are often fed a mixture of small bird seeds and rodent blocks along with insects and cat food in order to provide a balanced diet. These small rodents are possible prey for most predators.

These mice are very social and prefer living in groups. They are also very quick breeders with a gestation period of about twenty days and litters of one to six young. At seven days the young begin growing hair, at twelve days they open their eyes, and at about seventeen days they begin exploring outside the nest. These animals reach sexual maturity at four to six weeks of age and live an average of one to three years. One interesting fact about the African Pygmy Mouse is that its sex is determined by the X chromosome rather than the Y unlike most mammals.

The African Pygmy mouse is a unique and interesting species. Despite its prey status this animal is listed as Least Concern by the IUCN Red List. This fascinating species will hopefully continue to have a stable population in the future.

The Pygmy mouse is listed as Least Concern. Does not qualify for a more at risk category. Widespread and abundant taxa are included in this category, on the IUCN Red List of Threatened Species

Namings for the pygmy mouse

A young / baby of a pygmy mouse is called a 'pinkie, kitten or pup'. The females are called 'doe' and males 'buck'. A pygmy mouse group is called a 'nest, colony, harvest, horde or mischief'.

Some facts about the
Mouse