The order of sirenians contains five species in two families (Dugongidae and Trichechidae). The four living species of the Sirenia are the dugong, Amazonian manatee, West Indian manatee and African manatee. One species (Steller's sea cow) is extinct. The members of the order Sirenia are believed to be relatives of the elephants. Members of this order live their lives in the water and feed primarily on vegetation. They are seal-like animals with big streamlined bodies. To avoid danger a manatee or dugong can swim up to 16 miles per hour, but usually they swim much, much slower. The three species of manatees, and the closely related dugong, are unique in that they are the only plant-eating marine mammals in modern times. The most dangerous threat to them is hunting, fishing nets and boat accidents. 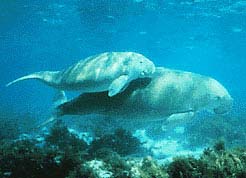 The dugong is the smallest member of the order of the Sirenia. The name 'Dugong' comes from the Malay word 'duyong', which means "lady of the sea" or "mermaid".  The best chance to encounter the dugongs is in northern Australian waters, where most of their population live. Dugongs don't see that well, instead they use their acute hearing. They feed in the shallow waters on seagrass with the aid of coarse, sensitive bristles, which cover the upper lip of their large and fleshy snout. Remember they are closely related to elephants? Dugong males have small tusks, which they use during the mating season to challenge other dugongs.

Most Amazonian manatees have a distinct white or bright pink patch on their breast. The largest recorded Amazonian was a male with a length of 2.8 m. In the wild it is difficult to measure, but captive adults daily consume from 9 - 15 kg. Amazonian manatees mostly feed during the wet season, when they eat new vegetation in seasonally flooded backwaters. During the dry season (September - March), they congregate in the main river channels or in deep parts of larger lakes, and may fast for weeks or months for lack of available food plants.The largest groups of manatees observed consist of only 4 - 8 animals. Most manatees are either solitary or a female with her young.

The West Indian manatee has a uniform gray or brown color. Some may weigh up to 3000 pounds, but averages lie between 400 and 800 pounds. They can reach lengths of up to 4.5 m! All manatees have a split upper lip. They use both parts of the lip to help put food in their mouths.Because grasses aren't very nutritious they feed on huge quantities. This has also given them a very slow metabolism. Some taxonomies differ two subspecies, the Florida Manatee and the Antillean Manatee.