Extraordinary Noses - The order of the Proboscidea 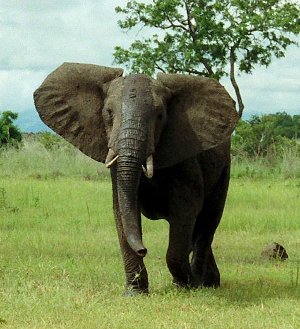 It's a nose, it's a tool, no, it's an elephant's trunk! The order of Proboscidea, to which elephants belong, has been named after the very organ that fascinates all who watch them: the proboscis, or nose. Evolution has fashioned this extraordinary combination of nose and upper lip into a tool used for countless tasks. Elephants are revered in many cultures as wise and powerful beings, and modern research has demonstrated that the capabilities of this animal go far beyond what we might imagine.

African and Asian elephants are the two main groups these animals are divided into. African elephants live on the marshes, grasslands and lakeshores of Sub-Saharan Africa, while a subspecies, the Forest elephants, roam the forests of West and Central Africa. African elephants are the largest land mammals today, standing at 10 to 13 feet (3.2 to 4 meters) tall and weighing 7700 to 26,000 lb (3,500 to 12,000 kg). The males and females both have tusks, very sparse body hair and arched backs. Asian elephants, at about 11,000 lb (5,000 kg) and 11 feet (3.4 meters) tall, have a slighter build, with smaller ears, a flatter head and back, and de-pigmentation on their hairy bodies, while only males have tusks. They are found in forests throughout Asia. Elephants are all herbivores, and require large amounts of water.

Owing to their large size, protective nature, and family structure, elephants do not have any natural enemies save for lions, although these big cats will hardly ever attempt to attack a herd, and rather wait for the rare chance that a calf strays from its mother, or a sick elephant is left behind. Such opportunities are few because elephants fiercely protect their own. Man is their only threat, with ever increasing deforestation and industrialization, not to mention poaching and hunting.

Elephants have been attributed with great intelligence, rivaling those of primates and sea mammals. In the self-recognition mirror test, elephants demonstrated that they were aware of their own image in the mirror, not confusing it with another elephant. This concept of self, along with extensively documented social behavior demonstrates that they are capable of altruistic feelings and complex emotions such as joy, grief and anger.

A case documented by elephant expert Dr. Cynthia Moss recounts how an elephant stood guarding a man whose leg had been broken by the matriarch of the herd. This elephant stayed with the man all day, occasionally gently patting him with her trunk and even moving him under the shade of a tree. When help arrived, she had to be chased off, so fiercely was she guarding her charge.

Grieving for dead loved ones is another remarkable trait displayed by elephants. Anthony Martin Hall, a biologist working in South Africa reported witnessing a group of elephants standing around a dead matriarch. They appeared to be burying her with leaves and dirt, and stayed around her body for two days, making low sounds. Similar incidents have been reported countless times. Elephants, besides humans, are the only species on earth known to grieve for their dead.

Revered by the Hindus as descendants of gods and by the Thai as symbols of wisdom, with brains relatively larger than all other animals, we might even learn something about family, loyalty and love from these wonderful and majestic creatures.