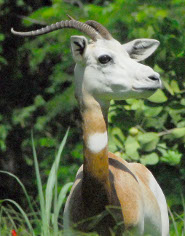 The Dama gazelle (Gazella dama) can be found roaming in groups in desert and grassland areas of Africa. These animals can often been seen throughout the Sahara Desert. A Dama gazelle herd is always on the move looking for food or migrating to new locations depending on the time of year. During the dry season Dama gazelles head to open grasslands for food and water, while during the rainy season they reside in the desert.

Shrubs, herbs, and other plants make up the diet of the Dama gazelle. Gazelles are grazers so they can be seen eating throughout most of the day on various grasses and leaves. A unique characteristic of the Dama gazelle is that it will even stand up on their hind legs to obtain out of reach vegetation. When most animals would simply continue on in search of easier food, the gazelle uses creativity and ingenuity to make itself taller by standing upright as a human would on just two legs.

Dama gazelles grow to be quite large as they are the biggest of all gazelles. Females are usually smaller, weighing between 77 and 88 pounds (35 and 40 kilograms), while males often weigh between 88 and 165 pounds (40 and 75 kilograms). Females are also shorter than the male gazelles. The Dama gazelle can grow up to 4 feet (120 centimeters) tall and over 5 feet (150 centimeters) in length. The Dama is very slender in appearance which allows it to run quickly. The Dama are usually brown and white in coloration, with the neck and upper body being brown while the head, legs, and rear parts of the body are white.

Natural predators like cheetahs, hyenas, and jackals are always a threat to the gazelle. Human development has taken up more and more of their habitat, leading to a decrease in the population. Dama gazelles have also been frequently hunted for their meat and horns leading to too few to reproduce quickly enough for a stable population.

Due to both natural and human causes, the Dama gazelles are unfortunately on the list of endangered animals. These animals used to be common throughout North Africa but continue to dwindle in numbers. The World Conservation Union's Red List of Threatened Species includes the Dama gazelle. Where countless numbers of gazelle herds once roamed, only a few hundred survive today. Programs are in place to try and breed gazelles in captivity, but the damage done to the gazelle population may be permanent.

The Addra gazelle, dama gazelle is listed as Critically Endangered (CR), facing an extremely high risk of extinction in the wild, on the IUCN Red List of Threatened Species

Namings for the dama gazelle

A young / baby of a dama gazelle is called a 'calf'.

Some facts about the
Dama gazelle