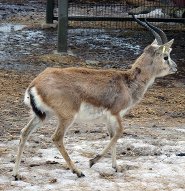 The Goitered Gazelle, Persian, or black-tailed gazelle (Gazella Subgutturosa) is a native of central Asia, southern western Pakistan, Iran and the Gobi desert. The Goitered Gazelle means 'Full below the Throat'. This specific name shows that the throat and neck parts of the mails swell during their mating season. This goiter does not due to the enlargement of its thyroid gland.

The main habitats of Goitered gazelle are gravel plains, limestone plateaus, and sands in deserts. Unlike other gazelle species, the Goitered gazelle neither leaps nor has a bounding gait but runs at a very high speed. Whatever their range, seasonal migration has always been seen in these animals. In winters, the herds may cover 10 to 30 km per day but in summers, the speed decreases considerably and they cover only 1 to 3 km per day.

Upper part of a Goitered gazelle's body is light brown. It starts darkening towards the lower white part forming a crisp line. An immature Goitered has specific facial marks which turn white with age leaving only one brown strip from eye to nose. The color of the tail is black while the buttocks are white. Unlike other members of its family, only the male Goitered gazelle has horns which grow 10 to 17.2 inches (25 to 43 cm) long. Its black colored, S-shaped horns bend backwards and turn at the tips.

Unlike other gazelles of this species, the Goitered gazelle's breeding season is restricted to 3 to 4 months that are from November to January. The babies take birth in April or May and for the first two weeks of their life the young ones keep hiding from their mother to gain strength for their wobbly legs. The mother usually returns three times a day to nurse the babies.

The female of the Goitered gazelle species becomes sexually mature when it is around 9 months old and the male matures at the age of 18 months. Generally, the female gives 1 or 2 babies at a time but in rare cases, it may give birth to 4 babies as well. Gestation period is 5 to 6 months and the weaning period is 4 to 5 months. Its life span is approximately 10 to 12 years.

Most of the activity of this species takes place in the evening or early in the morning because of its simultaneous grazing and leisurely walking activities. In the afternoon, the herds excavate oval-shaped, shallow pits under some shade to lie down. During the cold months of winter, this activity is reduced significantly. If a Goitered gazelle feels danger, it flees 200 to 300 meters, pausing to estimate the danger from that distance. It mostly feeds on leaves, grass, and shoots and its main predators are the wolf and the leopard.

The Goitered gazelle is listed as Vulnerable (VU), considered to be facing a high risk of extinction in the wild, on the IUCN Red List of Threatened Species

Namings for the goitered gazelle

A young / baby of a goitered gazelle is called a 'calf'.

Some facts about the
Goitered gazelle