Chinkara - a Gazelle that lives with Little Water 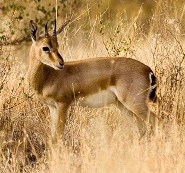 The Chinkara (Gazella bennettii) is type of gazelle native to various regions of southern Asia including Pakistan, Bangladesh, Iran and, predominantly, India (hence the common name "Indian Gazelle"). An adult Chinkara stands about 65 centimeters (26 inches) tall at the shoulder and weighs in at about 23 kilograms (50 pounds).

The Chinkara has a smooth, reddish coat in the summer, and in the colder months the otherwise only slightly paler detail in the gazelle's stomach and neck becomes several shades lighter, almost white. As with most animals under the threat of attack from more powerful predators, their coat has the primary function of aiding them to blend in with their grassland environment. The Chinkara sports distinctive hazelnut stripes running from the inner corner of their eyes to their mandible bordered by sharply-defined white fur. It has a black stripe beginning a few inches above the coccyx which widens as it reaches the tail, where it is bordered by a thinner patch of white fur. Characteristically of gazelles, they have relatively modest horns which, though rarely larger, are generally measured at around 40 centimeters (16 inches) at their maximum length.

Much like its African cousins, the Chinkara rarely wanders into territory occupied by humans and will actively distance itself from any mammalian species it perceives as a potential threat. What makes the Chinkara unique, however, is its remarkable ability to sustain itself on very little water. Indeed, researchers following Chinkara on the move have observed certain individuals go for days at a time without ever drinking from a real water source. Instead, they can survive merely on dew and other water condensed on leaves and shaded foliage. It is this same vegetation that provides the Chinkara's primary diet, which primarily consists of grass in addition to occasional fruits.

Though not yet in significant danger of extinction, Chinkara numbers are dwindling. A large part of this is due to game hunters, who in recent years have increasingly taken to pursuing these gazelles. Estimates place the remaining Chinkara at 75-85K, with their protected status doing little to deter hunters from reducing those numbers. Still, with such a number of individuals still living in the wild over such a large area, the population is not expected to dwindle significantly in the near future. Local conservation efforts have proved relatively successful, and indeed a number of cases to prosecute those caught hunting the Chinkara have resulted in prosecutions. A secondary effect of the decreased Chinkara population has been a corresponding decrease in cheetah numbers, (cheetahs are now presumed to be extinct in India), with the big cat being the Chinkara's primary predator.

Picture of the Chinkara by S. Shankar, licensed under Creative Commons Attribution 2.5 Generic

The Chinkara, indian gazelle is listed as Least Concern. Does not qualify for a more at risk category. Widespread and abundant taxa are included in this category, on the IUCN Red List of Threatened Species

Namings for the Indian gazelle

A young / baby of a Indian gazelle is called a 'calf'.

Some facts about the
Indian gazelle