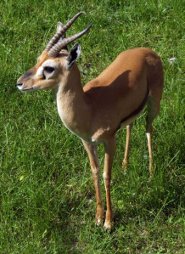 The Red-fronted gazelle (Gazella rufifrons) is a type of gazelle typically found throughout Africa, from Senegal to Ethiopia. Their primary habitat is in open areas that include brush and vegetation south of the Sahara. They live in a banded area that begins just south of the Sahara and stretches down to Togo. The Red-fronted gazelle is known for living in open habitats, and can sometimes be found near areas cultivated by humans. Since the Red-fronted gazelle requires more water than most species of gazelle, they must migrate seasonally each year in search of water supplies. During the wet season of the desert, the gazelle migrate north for water. When the dry season begins, they head south to avoid the drought.

The physical features of the Red-fronted gazelle are what make the animal unique. As the name implies, this species of gazelle has a red forehead with distinct cream-colored lines that run from the eyes to the nose. They also possess a white ring around their eyes. These features make the gazelle instantly recognizable. Typically, the Red-fronted gazelle has a body length of 105-120 cm (3.5-4 ft) and a weight of 20-35 kg (44-77 lb).

The diet of the Red-fronted gazelle usually consists of grasses, vegetation, and leaves. For this reason, they can often be found in grasslands and savannas just below the Sahara desert line. They usually live in small groups of two to six gazelle, with numbers rarely reaching higher than fifteen. Reproduction occurs throughout the year, and young animals are kept hidden in order to avoid predators. Males often mark their breeding grounds with dung or scents in order to keep other males away from their territory. Calves are born one at a time after a gestation period of roughly six months.

Picture of the Red-fronted gazelle by Andrzej Barabasz, licensed under GFDL.

The Red-fronted gazelle is listed as Vulnerable (VU), considered to be facing a high risk of extinction in the wild, on the IUCN Red List of Threatened Species

Namings for the redfronted gazelle

A young / baby of a redfronted gazelle is called a 'calf'.

Some facts about the
Red-fronted gazelle