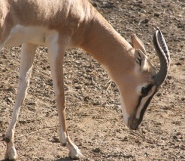 The Soemmerring's Gazelle (Gazella soemmerringii) were once the most abundant Gazelle on the African continent, moving about in large herds of several hundred. Today, they can be found in small groups between 5 and 20, often intermingling with herds of hartebeest, oryx, and domesticated camels. Both CITES and IUCN have listed the Soemmerring's Gazelle as a vulnerable species due to a 30% decline over 3 generations (21 years). Current estimates are that the decline will continue at a rate of about 10% per year. The likeliest cause of the decline is the loss of habitat to domestic grazing, hunting, and regional political unrest.

Soemmerring's Gazelle have a tawny brown coat interrupted by patches of white around the head, covering the belly, inside the legs, and over the rear end. Three black stripes extend from the top of the skull to the nose, with one covering each eye and the other centered on the bridge of the nose. The horns grow back over the skull in a lyre shape, are ridged, and can grow up to 22 inches (58 cm) long. Adults can measure 4-5 feet (120-150 cm) in length, 2.3-3 feet (85-92 cm) high at the shoulders, and weigh from 70-100 pounds (35-45 kg).

The Soemmerring's Gazelle inhabit lightly forested steppes and savannas on the Horn of Africa, from Eastern Sudan through Ethiopia, Eritrea, Djibouti, and Somalia. Food sources include acacia, brush leaves, grass, and herbs, and are known to migrate with the rainy season to ensure sufficient food is available. As a large herbivore they are food sources for several large predators, including the cheetah, lion, leopard, hyena, Cape hunting dog, and python. The primary defensive measure against predators is the ability to run and leap through the air for considerable distance at high speeds, up to 50 mph (80 kph).

Although the horns can be used for defense as well, most of the wear and tear visible on the horns of older males is from territorial disputes with other males. During the period from September to November males will mate with receptive females while walking together, with the male continuing to walk after mounting with his two hind legs. Gestation is 199 days, or about 6-1/2 months, so that the birth of a single infant occurs during the rainy season when food and water is plentiful. The young are weaned after 6 months, reach sexual maturity in 1.5 years, and live for up to 14 years.

Picture of the Soemmerring's Gazelle by , licensed under GFDL

The Soemmerring's gazelle is listed as Vulnerable (VU), considered to be facing a high risk of extinction in the wild, on the IUCN Red List of Threatened Species

Namings for the S

Some facts about the
Soemmering's gazelle