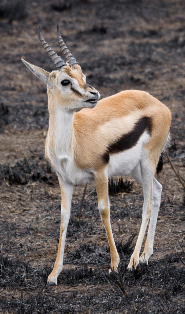 The Thomson's gazelle (gazella thomsonii) is the most common gazelle in East Africa. Although they are not as widespread as the Grant's gazelles, they can be found on ranches and farmland throughout East Africa, and persist long after other species have been killed off or migrated away.

Thomson's gazelles are commonly referred to as "tommies". Tommies stand at about half a meter (22-26 inches) tall and weigh in between 15 and 25 kilograms (35-55 pounds). Although very similar in appearance to the Grant's gazelle, they have some distinguishing features. Thomson's gazelles are slightly smaller in size compared to their cousins. In their coloring, tommies have a dark stripe that stretches from shoulder to flank, as well as a white patch on their rump. Females have either no horns, or very small, short, smooth horns. Males, which are larger, have a large ridged horns that curve back on their head.

The tommy has adapted to drier life on the open plains of East Africa, primarily in southern Kenya and northern Tazmania. Although tommies have many predators, including cheetahs, lions, leopards, and hyenas, they are frequently the last animals left on an abandoned ranch or farmland. They thrive by subsisting on the short, dry, remains of grasses left by the cattle, which make up 90% of their diet during dry seasons. Although they have many natural enemies, this disadvantage is balanced with fine senses of hearing, smell, and balance. Despite their persistence, many tommies fall victim to human gunshot.

Due to their vulnerability from predators, tommies form groups for protection. The strongest males set up territories by using exaggerated posing, marking their territory, and vigorously defending their territory with their horns. The groups consist of 5-50 females and their offspring, which wander through the male territories. These groups change in numbers, composition, and leadership as frequently as once an hour. Thomson's gazelles recognize others in their species or group by the largely visible black stripe and communicate disturbance through foot stamping. They breed twice a year, with a gestation period of six months. Due to the heavy threat of predation, approximately 50% of young tommies are lost as victims of prey.

While tommies are stubborn creatures that can subsist where other animals cannot, there has been a 60% decline in their population over the past 30 years. With a population estimate of 550,000, these animals are protected in many parks.

Picture of the Thomson's gazelle by Ikiwaner, licensed under GFDL

The Thomson's gazelle is listed as Conservation Dependent (LR/cd), the focus of a continuing taxon-specific or habitat-specific conservation programme targeted towards the taxon in question, the cessation of which would result in the taxon qualifying for one of the threatened categories below within a period of five years, on the IUCN Red List of Threatened Species

Namings for the Thomson

A young / baby of a Thomson is called a 'calf'.

Some facts about the
Thomson's gazelle