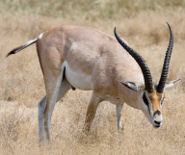 The Grant's gazelle (Gazella granti), a species of gazelle, roams the grasslands from Tanzania to Ethiopia, Sudan, as well as along the coast of Kenya. The animal stands between 76 and 91 centimeters or 30 to 36 inches from bottom of the hooves to the shoulder blade and its weight ranges from 45 to 65 kilograms or 100 to 145 pounds. They are differentiated from other species of gazelles by their lyre shaped horns.

The Grant's gazelle lives in the open plains as well as in the low shrublands. The gazelle tends to avoid high grasses as this compromises their ability to spot their predators. Along with most other animals in the ungulate family, they are migratory but migrate in the opposite direction of most African animals. Instead of moving towards water, the Grant's gazelle can survive on vegetation without access to water. They get most of the water from the plants which they consume. They eat primarily brush and shrubs during the summer months and oats and crispy plants during the remainder of the year. The predominant predators of the Grant's gazelle are cheetahs, although the cheetah has been known to prefer the Thomson's gazelle. Other predators include the African wild dog, jackals, as well as humans. When the female gazelle is estrous, the male will guard the females and prevent other males from mating with the females in their herd. Single male gazelles live in herds of young adolescent bucks as well as bucks which do not have their own territories. In order for a male to be permitted to enter a group, they must perform power displays. However, male gazelles, unlike the females, are permitted to leave the herd at any point they choose.

The Grant's gazelle becomes sexually mature at the age of 18 months. When sexually mature, the male gazelle will determine whether or not a female is in estrous and, if she is, he will mate with her. After the female becomes pregnant, the gestation period lasts for approximately 198 days.

This species of gazelle is not endangered although they are no longer present in some areas in which they used to live. Major issues include hunting as well as the removal of their natural habitat. They largely live within nature reserves and, if these nature reserves were to be depleted, the species may unfortunately become endangered.

Picture of the Grant's gazelle by Ikiwaner, Ngorongoro crater, licensed under GFDL

The Grant's gazelle is listed as Conservation Dependent (LR/cd), the focus of a continuing taxon-specific or habitat-specific conservation programme targeted towards the taxon in question, the cessation of which would result in the taxon qualifying for one of the threatened categories below within a period of five years, on the IUCN Red List of Threatened Species

Namings for the Grant

Some facts about the
Grant's gazelle