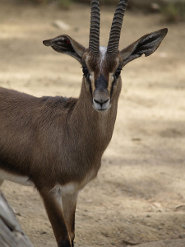 Cuvier's gazelle (Gazella cuvieri) is also known as the Atlas Gazelle, edmi, and Mountain Gazelle. The head, back and legs of the Cuvier's gazelle are dark brown in color while its rump patch and lower part (belly) are white. Its tail is almost black and there is a black spot at the tip of the nose. There are black strips on its face running from the nose to ears. There are spiraled, vertical horns present in both male and female gazelles and their length is about 35 cm (14 inches).

In the starting of the 20th Century, this species was found in great numbers in the Moroccan Mountains, western Tunisia, and Algeria. After that, there was a significant drop in its population by the year 1932 and only small herds of Cuvier's gazelle were seen by 1972 in the Atlas Mountains. At present, this species has very little population scattered at the higher altitudes of Tunisia, Morocco, and Algeria. The range where Cuvier's gazelle is found is quite large. It includes pine forests, oak forests, vineyards, open country, desert plateaus, and grasslands. Atlas Mountains are the main habitat of this species, since it is found only at higher altitudes.

Cuvier's gazelle is particularly seen in early morning or in the night roaming in the valleys and during the day it moves to the hills. In order to drink water, it visits waterholes regularly. The gazelles patrol their territory leaving their signs with dung and urine. There is only one male present in each territory but females can be seen in one or more numbers with their babies. Males sometimes indulge in quarrels with their horns lying down the back, head raised, and the horns interlocked and pushing to attain dominance.

Early winter is the mating season for Cuvier's gazelle and the young ones are born in spring. It takes about 170 days and this is also the time for fresh vegetation after rains. There is only one calf in most of the cases but twins can also be found sometimes. In good conditions, a female may conceive twice a year but this is very uncommon. For the first few weeks, the young ones stay hidden in tall grasses so there is no risk from predators. After seeing the predators, this nervous species signals alarm with the flick of their tails.

This species has been hunted for its skin, sport, and meat wantonly, resulting in the reduction of its number to a great extent. At present, since the habitat is being used for agricultural activities and the land is also being turned into grazing grounds, this species is facing the danger of becoming extinct.

Although, in Tunisia, Cuvier's gazelle is found only in protected areas, it is not the same case in Algeria and Morocco. Availability of suitable habitat for these captive animals is sufficient in Tunisia but arrangements for accessible waterholes and safe corridors are needed to re-establish this species successfully. In Almeria, North America, and Spain, Cuvier's gazelle is found in large numbers as captive animals.

The Cuvier's gazelle, edmi gazelle, idmi is listed as Endangered (EN), considered to be facing a very high risk of extinction in the wild, on the IUCN Red List of Threatened Species

Namings for the Cuvier

Some facts about the
Cuvier's gazelle