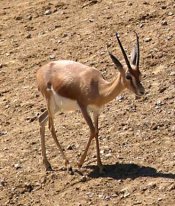 The Dorcas gazelle (Gazella dorcas) is closely related to the mountain gazelle, but is different on a few points. They have longer ears and they have curvier horns. The Dorcas gazelles live in northern Africa, and the Sahara and Negev deserts in Morocco, Rio de Oro, Algeria, Tunisia, Libya, Chad, Somalia and Ethiopia. In the Middle East they live in parts of Israel and Sinai. The coloring in subspecies is different, in the Northern Sahara, they are an ocher color and they have darker flanking stripes. But the population near the Red Sea, has a more reddish-brown and lighter flanking stripes.

Their diet consists of leaves, flowers and pods of Acacian trees and various bushes.

When they feel threatened they sound their alarm call which sounds like barking. When chased, these gazelles use "stotting" (leaping straight up during pursuit by a predator) as a method to signal their fitness to the predator and warn other gazelles a predator is present. Dorcas gazelles can reach speeds of up to 80 km/hr. Their natural predators are the lion, cheetah and the leopard, but their main threats are habitat destruction, hunting, and the introduction of domestic sheep and goats.

The Dorcas gazelle is listed as Vulnerable (VU), considered to be facing a high risk of extinction in the wild, on the IUCN Red List of Threatened Species

Namings for the dorcas gazelle

A young / baby of a dorcas gazelle is called a 'calf'.

Some facts about the
Dorcas gazelle