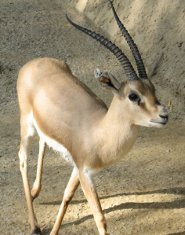 The Rhim gazelle (Gazella leptoceros) has become the species of gazelle that is most adapted to the desert environment. Found throughout the Sahara desert, these gazelle roam around looking for spots of vegetation in order to survive. Throughout the years, they have adapted to live in the harsh desert environment. Their pale coats reflect the rays of the sun to prevent overheating, and their hooves enable them to walk on sand. The Rhim gazelle is often found in the countries of Egypt, Algeria, Chad, Libya, Niger, and Tunisia. They are known for their distinct horns, which in males are very large (30-41 cm / 1-1.3 feet long) and S-shaped. In females, the horns are much smaller, only about 20-38 cm, or 8-15.2 inches in length. These horns have given them the nickname "slender-horned gazelle."

Other key physical characteristics of the Rhim gazelle include its pale color. It is the palest of all of the gazelle species, and it usually has a cream colored or yellow-white coat. This helps to reflect the harsh rays of the desert sun. They also have a faint flank stripe and faint markings on the face. The Rhim gazelle also has reddish stripes that run from the eyes to the nose. Typically, their body length is between 100-110 cm (3.3-3.6 ft) and they weight roughly 20-30 kg (44-66 lb.) by adulthood. The Rhim gazelle travels as a nomad, mainly feeding during the early morning or late at night to get the dew off of vegetation. Their diet consists mainly of leaves, grass, and other vegetation that can be found in the desert. They are highly adapted to desert life, and hardly ever need to drink water. Most of their water comes from dew found on grass and leaves in the early morning.

Right now, the Rhim gazelle is considered an endangered species. Their primary natural predators include the cheetah, hyena, lion, leopard, and the Cape hunting dog. The Rhim gazelle has also suffered from a loss of habitat and hunting in recent years. Efforts are being made in national parks to continue the species in a confined habitat until they can be released into their natural environment.

Picture of the rhim gazelle by FisherQueen at the Cincinnati Zoo, licensed under GFDL

The Rhim gazelle, rhim, sand gazelle, slender-horned gazelle is listed as Endangered (EN), considered to be facing a very high risk of extinction in the wild, on the IUCN Red List of Threatened Species

Namings for the rhim gazelle

A young / baby of a rhim gazelle is called a 'calf'.

Some facts about the
Rhim gazelle