Speke's Gazelle, The Gazelle With A Loud Nose 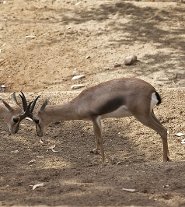 The Speke's Gazelle (Gazella spekei) is among the smallest of the Gazelles, reaching a length of 90.5 to 100.5 cm, equal to just over 3 feet, a height of about 50-60 cm, equal to 1.6 to 2 feet, and they weigh in at about 15 to 25 kg, or 33 to 55 pounds. The upper body is a brownish tan color, which is separated from the white belly by a black stripe. The unique folds on its nostrils inflate when excited, and are responsible for the loud resonant calls the Speke's Gazelle makes when threatened. Another unique behavior to the Speke's Gazelle is the blend of jumping, bouncing, and running they do when frightened.

The Speke's Gazelle has become endangered mainly because their grazing areas are often taken over by domestic livestock, and the range it covers has no protected areas so the threat of extinction will continue. The black stripes around the eyes reduce glare, and are bordered by white stripes, thus giving the animal a painted face appearance. Speke's Gazelles are found only on the horn of Africa, primarily in Somalia and some in neighboring Ethiopia. Like most animals living in a hot and dry scrubland environment, it is mostly active in the early morning and late evening hours, feeding on leaves, herbs and grass while resting during the day. The Speke's Gazelle can survive without water for some time, a useful adaptation in their harsh semi-desert environment.

Both male and female Speke's Gazelles have horns, males have longer curved horns while females have smaller straight horns. The Speke's Gazelle is on the menu of several predators including the Leopard, Hyena, Lion, Python, and Cheetah, thus the young lie hidden and motionless in the brush until they are weaned at about three months. After a pregnancy of about 7 months, a single young is born among herds of about 12 to 20 animals, and Speke's Gazelles usually live about 12 years. Herds are composed of either a dominant male with his breeding harem covering an area of half to 2 square miles, or the bachelor herd of young and juvenile males.

The Speke's gazelle is listed as Vulnerable (VU), considered to be facing a high risk of extinction in the wild, on the IUCN Red List of Threatened Species

Namings for the Speke

Some facts about the
Speke's gazelle