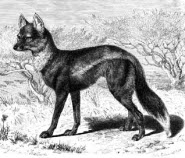 The Side-striped jackal (Canis adustus) inhabits the middle and southern parts of African territories. This jackal opts for the woodlands of the savanna world. It is known that the biggest distribution in Africa belongs to the Side-striped jackals. It is very similar physically to the Silver-backed jackal. The name originates from the light marks running alongside the sides of their bodies. Coming from afar, the stripes are not exactly outstanding, but up close, the banding patterns can be discerned. Male Side-striped jackal is bigger than females, and significantly so.

Their diet mainly consists of rats, insects and fruits. Compared to their cousins, this jackal is more of a night creature, and more omnivorous.

Breeding period varies, all depending on the location where they reside. The gestation time frame goes from 57 to 70 days, and on the average, they produce three to four cubs. A Side-striped jackal's den is often situated on termite mounds, which have been abandoned by the Aardvark, for whatever reason. Weaning period goes from 8 to 10 weeks. In the wild, the longevity of an individual could go past a decade, 12 years in theory.

They live in pairs, and could even congregate up to 6 members. These jackals can produce a repertoire of sounds, such as hooting, growling, whining and yapping.

The Side-striped jackal is listed as Least Concern. Does not qualify for a more at risk category. Widespread and abundant taxa are included in this category, on the IUCN Red List of Threatened Species

Namings for the sidestriped jackal

Some facts about the
Side-striped jackal