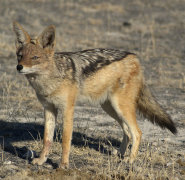 A Black-backed jackal weighs on the average about 5 to 10 kgs. They have black hair, from which their name is derived, found from the nape all the way to its tail's area. Their chest and underparts are white. The rest of their fur can go from red-brown to ginger shade. Its head is very much like a dog's, possessing a pronounced muzzle and ears that are high-pointed. The female Black-backed jackal's color is usually less pronounced.

They are mainly nocturnal, but jackals can be active both in nighttime and daytime. If it is living near the borders of human settlement, it only comes out at night. When they go after a prey, its ears are pricked. Their senses of smell and hearing are very well-developed. This particular kind of jackal is cautious when it comes to human beings, and against bigger animals, they are not aggressive, unless threatened. Black-backed jackals are not endangered, and one major reason is their resourcefulness.

Interesting fact: Because of their speed, the black-backed jackal can snatch a bite or two from under a lion's, hyena's, or leopard's nose.

Picture of the black-backed jackal by Hans Hillewaert, licensed under Attribution ShareAlike 2.5

The Black-backed jackal, chacal à chabraque, silver-backed jackal is listed as Least Concern. Does not qualify for a more at risk category. Widespread and abundant taxa are included in this category, on the IUCN Red List of Threatened Species

Namings for the blackbacked jackal

Some facts about the
Black-backed jackal