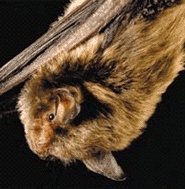 The Indiana bat (Myotis sodalis) is a brown to grayish bat which is listed as an endangered species due to population loss and habitat destruction. Its known range extends from the northern panhandle of Florida through Alabama and Georgia, north to cover all of Tennessee, parts of Western Virginia, and Northern Arkansas, along with all of Missouri, Indiana, Illinois, West Virginia, Ohio, southern Michigan, Pennsylvania, and upstate New York. It also has been found in some of the smaller states such as New Jersey, New Hampshire, and Vermont. The Indiana Bat is hard to distinguish from other related bats due to its similarities, especially a close relative of the Indiana Bat called the ‘little brown bat’. However the way they are told apart most often is the size of their feet, the length of the hairs on their toes, and also that instead of having black lips, theirs are pink. The Indiana Bat usually grows up to 2 inches and can weigh as much as a fourth of an ounce, additionally they live up to nine years in the wild, however some can live nearly double that amount of time – the record being 14 years. Its variations in color are often more brownish, however they can range from a lighter grayish color to a dark black. It is estimated that since the mid 70’s the population of the bat has been decimated, and is only at 50% of pre 1970’s levels today. The current estimated population is under but close to 250,000, and nearly 23% of that population hibernates in Indiana in just a few caves. When hibernating they will cluster into very tight groupings, and will live in caves that provide only the most optimal of conditions for their winter sleep.
Although it has a large range and overlaps with its close relative the Gray Bat, it has a significantly smaller population caused by destruction of colonies, pesticides, and the loss of habitat in the clearing of woodland for housing subdivisions and other habitat losses. The Indiana Bat is threatened by the WNS (white nose syndrome) a mysterious illness which has killed tens of thousands of bats. Although it may not be a direct cause, it is usually seen as a small white ring of fungus around the muzzle of an afflicted bat, and also on the wings. A recent disease, it was only first noted widely in 2006, and has so far been seen in thousands of bat deaths, and is spreading rapidly. Between 2006 and 2009 it spread to 9 states. Of the caves afflicted, mortality rates can be as high as 90%.

Their binomial name is Myotis sodalist, and they are in the genus Myotis – otherwise known as the Mouse Eared Bats. Myotis contains within it around 90 species of bat, and belongs to the Subfamily Myotinae. Myotinae has three genera and is a Subfamily of the Family Vespertilionidae, or vesper bats. Vespertilionidae is the largest Family of bats as far as species count goes, and within it has five Subfamilies; Vespertilionidae belongs to the Suborder Microchiroptera, which has seven known super-families, and is also known as the microbat; Microchiroptera belongs to the order Chiroptera, which contains all bats, and has only one other Suborder called Megabats or Megachiroptera. Chiroptera belongs to the Superorder Laurasiatheria of which many orders of mammal belong, such as the carnivores and ungulates. Laurasiatheria in turn belongs to Infraclass Eutheria, of which all placental mammals are members; this belongs to Subclass Theira of which all mammals, with the exception of the Monotremes, are members.

The Indiana Bat is not the only bat afflicted by the white nose syndrome; in fact many relatives are also being infected as they also suffer the same stresses of habitat loss and pollution from pesticides, although the actual cause of the illness remains a mystery.

The Indiana bat, social bat is listed as Endangered (EN), considered to be facing a very high risk of extinction in the wild, on the IUCN Red List of Threatened Species

Namings for the Indiana bat

Some facts about the
Indiana bat