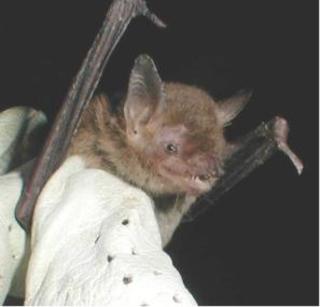 The Cave myotis is listed as Least Concern (LR/lc), lowest risk. Does not qualify for a more at risk category. Widespread and abundant taxa are included in this category, on the IUCN Red List of Threatened Species

Some facts about the
Cave myotis

Facts about the cave myotis

" (Brown, 1998) *49* "The cave Myotis is mostly a cave-roosting species that forms large colonies in caves, mines, and sometimes buildings.

043 Tw [(The threat to the cave myotis is very different.

1996: Myotis velifer is uncommon within the White Sands Missile Range.

4 The threat to the cave myotis is very different.

The cave myotis (Myotis velifer) is known from about 10 miles south of the Colorado border in the Oklahoma Panhandle and may well occur on Colorado's Mesa de Maya.

The southwestern cave myotis is one of nine Arizona bats that look very much alike.

The cave myotis is the most abundant bat of the Edwards Plateau and hibernates in central Texas caves in winter. (Full text)

Another colonial bat (Myotis velifer) is a common associate of the Brazilian free-tailed bat in the guano caves. (Full text)

Identification: Myotis velifer is a large Myotis, with a forearm of 37‑47 mm. (Full text)