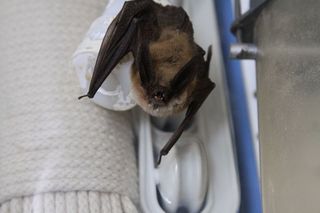 The Long-eared myotis is listed as Least Concern (LR/lc), lowest risk. Does not qualify for a more at risk category. Widespread and abundant taxa are included in this category, on the IUCN Red List of Threatened Species

Some facts about the
Western long-eared myotis

Facts about the western long-eared myotis

Range MYOTIS EVOTIS is widespread and probably found throughout the entire state.

Myotis evotis is distributed from British Columbia, south to Baja California and east to North Dakota, and then southward through South Dakota, Nebraska, and New Mexico; excluding the southern deserts of Arizona and California. (Full text)

Comments on General Habitat Associations The long-eared myotis (Myotis evotis) is seemingly a species of the yellow pine zone and above.

Long-Eared Myotis (Myotis evotis) is listed as a species of concern.

The western long-eared myotis is found in a variety of habitats but most often in coniferous forests.