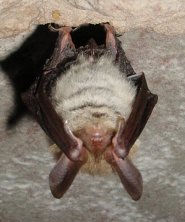 The Bechstein's bat (Myotis bechsteini) is uniquely difficult to detect, even in its usual broadleaf woodland habitat. This bat especially likes to roost in holes made by woodpeckers or other rock and tree crevices. The sound this species uses for echolocation is so quiet that it is often missed by the special radar equipment used to find bats. This also gives the bat an advantage over its prey as well as its predators. The head and body length of this bat is 4.3-5.3 cm (1.69-2.09 in), the wing span is 25-35 cm (9.84-13.78 in) and the bat weighs 7-14 g (.25-.49 oz). The dorsal fur is light brown, while the ventral fur is pale grey to white. The prominent ears of a Bechstein's bat are small compared to some bats, but they are designed to pick up the slightest whispering of other bats and the faintest sound from its predator or prey.

This bat plays a huge role near the top of the forest food chain, especially pregnant or lactating females who eat two-thirds of their body mass of prey per night. A Bechstein's bat is carnivorous and eats mainly moths, spiders, flies, mosquitoes and beetles. This species flies low and forages for its food off the ground or tree branches. During summer males are solitary while females occupy holes in trees and raise their young communally. There is preferential grooming between a mother and her female young, establishing a strong bond among the females.

This species is found in southwest Asia and throughout Europe with the exception of the northern regions. The Bechstein's bat is located mostly in the southern areas of the UK, where it is very rare and named as a priority species for conservation in the Biodiversity Action Plan. Of all the bat species in Europe, the Bechstein's bat is listed for strict protection in the European Council Habitat Directive.

Every member of a woodland habitat is vital to the survival of many others. How do we help preserve this important part of our ecosystem? If we safeguard roosting sites, especially older trees and erect bat boxes in their habitats, we can help maintain existing populations of the Bechstein's bat.

The Bechstein's bat is listed as Vulnerable (VU), considered to be facing a high risk of extinction in the wild, on the IUCN Red List of Threatened Species

Namings for the Bechstein

Some facts about the
Bechstein's bat