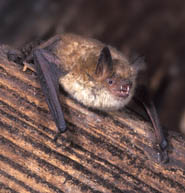 The Geoffroy%u2019s bat (Myotis emarginatus) is also known as Geoffroy’s Myotis. Geoffroy’s bat can be found in central and southern Europe, northwestern Africa, Caucasus and Levantine regions, and the eastern Mediterranean. Although plentiful in some parts of France, it is much rarer in the rest of Europe and appears on their species needing further research and protection. They mature in about a year and a half and start the cycle of having a pup of their own annually. An adult weighs about .011 kg and will live 23 years. Geoffrey’s bats live in large groups known as colonies or clouds. These can be as large as 1200 bats.

Geoffroy’s bat has been listed as "Vulnerable" since 1996 and has a high risk of extinction according to the IUCN Red List of Threatened Species. The last assessment was in 2008 when it was considered of "least concern". In some areas populations experienced a significant decline between the 1960s to the 1990s.

More recent indications are that populations of Geoffroy’s Bat are growing in central Europe and at least close to stable in most other areas. It has even moved into new areas.

Locations and Habitat of Geoffroy’s Bat

This bat can make its home across a wide range, as it is adaptable and not restricted to a special habitat. Its biggest restriction is its specialized diet. It needs grassland where it can forage through scrub for spiders and flies. It will live anywhere from sea level to about 1800 m.

This species travels very little and is not known for migration. However there are some places it is seen only in the summertime. It tends to live underground, especially in the winter. During summer months it can also be found settled in the attics of buildings. Some African colonies reside in caves.

Since Geoffroy’s Bat is found largely over agricultural landscapes, changes in agricultural activities can influence populations. Any large scale disturbance of the earth or removal of buildings can take away their homes. The African caves are being threatened by vandalism and fires. African traditional medical procedures also require the bat, and many are collected each year.

Picture of the Geoffroy’s Bat by Dodoni, licensed under GNU Free Documentation License

The Geoffroy's bat is listed as Vulnerable (VU), considered to be facing a high risk of extinction in the wild, on the IUCN Red List of Threatened Species

Namings for the Geoffroy

Some facts about the
Geoffroy's bat