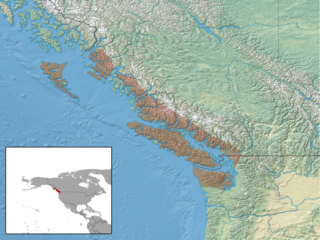 The Keen's myotis is listed as Least Concern (LR/lc), lowest risk. Does not qualify for a more at risk category. Widespread and abundant taxa are included in this category, on the IUCN Red List of Threatened Species

Some facts about the
Keen's myotis

Facts about the Keen's myotis

The Keen's myotis (Myotis keenii) is one of several species of long-eared bats in its genus.

The Keenâ€™s bat (Myotis keenii) is found in the northwest part of the state of Washington and farther north along the Pacific Coast.

The Keen's myotis is one of several species of long-eared bats in its genus and is found from Alaska south to the coast and coastal islands of British Columbia and the area of Puget Sound in Washington. (Full text)

Keen’s myotis is brown in color, darker above than below, and its fur is silky, not glossy like that of the little brown bat which it resembles. (Full text)