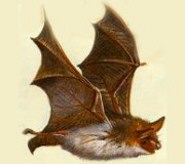 Myotis blythii is abundant in many areas of southern Europe, while at the same time in areas such as Switzerland they are very rare and were designated as "Strongly Endangered" as recently as 1994. However, the species as a whole is abundant and widespread, with the only real threats being man-made; bat foraging areas are being overrun by urban and agricultural developments, and pollution is always a serious threat. Outside of the human threat, common predators of bats in Europe and Asia are primarily owls, snakes, and a variety of small mammals.

The Lesser mouse-eared bat is a nocturnal species that feeds at night by flying over fields and pastures scouting for insects like crickets and moths. These bats are intelligent and resourceful, with most returning to the same fields night after night; in the event that a field has been cut, burned, or otherwise degraded, the bats will scout the surrounding areas for another suitable foraging ground. One of the most amazing aspects of the Myotis blythii is the hovering maneuvers it utilizes to capture prey; the Lesser mouse-eared bat has been observed hovering in tightening circles until pinpointing the prey, and then hovering right up behind it to pluck it from a blade of grass or a protruding leaf.

Lesser mouse-eared bats are small and have a very delicate appearance, with a soft brown fur often lighter on the underside and sometimes on the head. They typically roost in caves and buildings, church steeples and bell towers being among their favorites, but rarely cause any concern or inconvenience to the human population. The Myotis blythii averages around 16 grams, or 0.04 pounds, but some specimens have weighed in at over 20 grams or more. These bats typically grow to about 65 millimeters in length, or slightly larger than 2 ½ inches, with a wingspan of 350 to 400 millimeters which is equivalent to about one foot. These delicate mammals only have one pup per year, typically between May and July, and are crucial in their role as insect and pest population controllers, as well as helping to pollinate plants and remove pests from certain crops.

The Lesser mouse-eared bat is listed as Least Concern (LR/lc), lowest risk. Does not qualify for a more at risk category. Widespread and abundant taxa are included in this category, on the IUCN Red List of Threatened Species

Namings for the lesser mouseeared bat

Some facts about the
Lesser mouse-eared bat