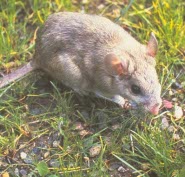 A Bushy-tailed Woodrat (Neotoma cinerea) can be found in North America, ranging from arctic Canada down to northern Arizona and New Mexico, and as far east as the western portions of Nebraska and the Dakotas. The Woodrats can be recognized by their big ears and its bushy tail. Its back is pale gray with a mix of brown, with white underneath.

They are also called packrats and are known to be capable of building stick homes within caves and crevices. If you are wondering where the word "packrat" comes from, a Bushy-tailed Woodrat's house holds items brought in from the outside, such as glass, pine cones, cardboards, plastic odds and ends, wire...you name it.

The territory of the woodrats is small, and a long time back, it was thought by experts that they would not go away farther than 60m from their nests. However, recent studies assert that the female can go as far as 500m. Basically, a typical woodrat is solitary, nocturnal and strongly protective of its own territories. Most facets of its behavior is thought to be a by-product of predation, and they have a lot to escape from. Weasels, black bears, bobcats, hawks and so many others, of course...that includes man.

Their diet consists of a variety of ingredients. In dry locations, they can survive on succulents, but in woody habitats, they consume a lot of woody vegetation. A Bushy-tailed Woodrat gets all of the water it needs from the foods it consumes. As prey, they are the main food source for Spotted Owls, an endangered species.

Interesting fact: These woodrats get enticed by shiny things, they often get them from camps or other establishments. So, if you are camping in one of their territories, watch out!

The Bushy-talied woodrat, packrat, woodrat is listed as Least Concern (LR/lc), lowest risk. Does not qualify for a more at risk category. Widespread and abundant taxa are included in this category, on the IUCN Red List of Threatened Species

Namings for the bushytailed woodrat

Some facts about the
Bushy-tailed woodrat