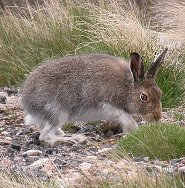 The Mountain Hare (Lepus Timidus) is found from Scandinavia to Eastern Siberia. In addition it also occurs in the Alps, Poland, Ireland and the United Kingdom. It is also known as the white hare or blue hare in winter and is different from the brown hare or other rabbits for several reasons. As compared to brown hare, it is lighter in built-up and its tail remains white throughout the year. Its ears are black at the tips and during winters, it turns white while in summers remains brown. Although females look similar to males in appearance, they are actually heavier than the males. The size of an adult hare from head to tail is approximately 46.65 cm (18.56 inches) and the tail is about 4.38 cm (1. 72 inches). The weight of an adult hare can be up to 2. 6 kg (5.732 pounds) and if well-fed in captivity, it can grow a little more and attain more size and weight.

In Britain, the mountain hare previously was found only in the Scottish highlands in Great Britain but later, it was translocated to Wales, England, some Scottish islands, and the Isle of Man for shooting purposes. Now, it can be also found in south-west Scotland, in the borders areas, and in the Peak District. Today, the mountain hare is thought to become extinct in Welsh region. Only six species are now found in England and moreover, the position of these species here seems precarious. Outside England, there is broad distribution of this species, especially in the Palaearctic region.

Generally, the mountain hare, as its name predicts, is found in hilly regions and its main habitats include boreal forests and the heather moorlands of Great Britain. It is also found in dry-rocky-hills, new forest plantations, and mountain grasslands. The mountain hare is also found in the arable lowlands and green pastures where there are no brown hares.

The mountain hare is generally active at night but it becomes more active during the day time in the breeding season. During the daytime, the mountain hare prefers resting in burrows or scrapes, and forms in soil or snow. Normally, it is seen that they like solidarity, sometimes, they roam in groups and the number can go up to 70 individuals in one group. The mountain hare feeds itself on grasses, sedges, herbs, rushes, bilberry, and other such vegetation.

The breeding season of mountain hare extends from February to August. During the breeding period, many males may try to pursue one female but if the female does not want to mate, then it may not attend to them. The female may give birth to one or four litters in one year consisting of 1-5 young, called leverets. Gestation time is about 50 days. The young ones have fur at birth and they are quite independent from birth. The mother comes from time to time to suckle them. Adult mortality among mountain hare is quite high and its major predators are stoats, cats, birds of prey, and foxes. If spared, their lifespan may reach up to 9 years of age.

The Arctic hare, mountain hare is listed as Least Concern (LR/lc), lowest risk. Does not qualify for a more at risk category. Widespread and abundant taxa are included in this category, on the IUCN Red List of Threatened Species

Namings for the mountain hare

Some facts about the
Mountain hare