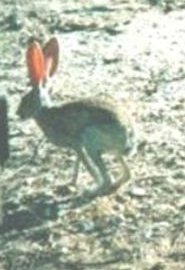 The Antelope jackrabbit (Lepus alleni) is a species of North American hare. Known for its ability to make high leaps, and ears that are especially large, the mammal is named after the fast, long-legged antelopes of Africa.

Antelope jackrabbits can run as fast as 45 miles (72 km) per hour, and can jump as high as five-feet (1.5 m) and as far as 22-feet (6.7 m). The Antelope jackrabbit watches for predators from almost any angle; its large eyes are placed high and back enough to provide almost a 360-degree view. Predators include coyotes, rattlesnakes, bobcats and cougars. Once spotted and chased, the Antelope jackrabbit will race from its enemy, purposely flashing its white rump to confuse the predator.

Weighing between nine to 10 pounds (4.5 kg), the Antelope jackrabbit ranges from 18 to 24-inches (45 to 60 cm) in length, with a tail up to four inches (10 cm). The whitish ears, which grow as long as eight inches, help regulate body temperature by either transferring heat back to the air as needed or maintaining body warmth in cold weather. The ears also become erect when the Antelope jackrabbit is alarmed.

The Antelope jackrabbit is commonly found in northern Mexico and Arizona in the United States, and has been observed along the border of New Mexico and portions of southeastern California. Due to its stable population, the Antelope jackrabbit is not considered at risk of endangerment. Its natural habitat is grasslands at moderate elevations or deserts where grass grows under shrubs.

Because it is nocturnal, the Antelope jackrabbit spends the day resting, usually in the shade of grass, brush or cactus where temperatures are lower than the open desert. Blending in with its surroundings, the jackrabbit uses camouflage to evade detection.

The breeding season runs from January to October, with a gestation period of roughly 42 days and the possibility of seven litters per year. Litter sizes average from one to five. Unlike rabbits, which are born blind, the Antelope jackrabbit young are born fully haired and with eyes open. Young are also born able to hop.

The Antelope jackrabbit is listed as Least Concern (LR/lc), lowest risk. Does not qualify for a more at risk category. Widespread and abundant taxa are included in this category, on the IUCN Red List of Threatened Species

Namings for the antelope jackrabbit