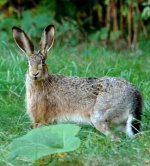 The tradition of the Easter bunny originates from West-european cultures, where it is a hare (Lepus europaeus) rather than a rabbit... German protestants had an abundance of eggs because of fasting. "German Protestants wanted to retain the Catholic custom of eating colored eggs for Easter, but did not want to introduce their children to the Catholic rite of fasting. Eggs were forbidden to Catholics during the fast of Lent, which was the reason for the abundance of eggs at Easter time." (source)

The Easter bunny / hare would leave eggs for good children. The egg and its symbolism comes from the Romans: "The Romans believed that all life proceeded from an egg, so the egg came to symbolize birth and rebirth. Christians regarded eggs as the seeds of life and attributed them with the symbol of Jesus' resurrection." (source)

Hares can run up to 70 kilometers per hour. Around spring, hares change their behavior and can be seen fighting each other, this can be either intermale competition or a female testing a male or rejecting him. Unlike the young of rabbits, the young of hares are born with fur and eyes open and are able to defend themselves quickly

Photo taken on 16 Sep 2004 by de:User:Fmickan, licensed under GFDL

The Brown hare, european hare is listed as Least Concern (LR/lc), lowest risk. Does not qualify for a more at risk category. Widespread and abundant taxa are included in this category, on the IUCN Red List of Threatened Species

Namings for the European hare

Some facts about the
European hare