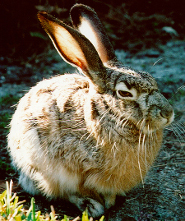 The Black-Tailed Jackrabbit or Desert hare (Lepus Californicus) belongs to the common hare species and is found at elevations up to 10,000 feet from the sea level in Mexico and Western America.

The jackrabbit, like its other family members, has long ears, powerful and long rear legs, and a specific characteristic of rabbits. The average height of the hare is about 61cm (2 feet) and the weight of a mature hare is about 1.4-2.7 kg (3-6 pounds). Among all rabbit species found in North America, the black-tailed jackrabbit is the third largest rabbit. The dorsal fur of this rabbit is agouti in color and it is creamy white from undersides and the inner parts of the legs. The inside of the ears is unpigmented and the outer surface is black-tipped.

The black-tailed jackrabbit is a native of chaparral, prairie, and desert communities, and can be seen feeding itself in cultivated lawns and green pastures. Although by nature it is nocturnal and crepuscular, sometimes, it can be seen during the daytime as well. Its diet mainly includes sagebrush, cactus, grasses, juniper berries, alfalfa and clover type crop plants and mesquite. It fulfills its need of water from the food it eats, and so it drinks very little water. Unlike other family members of this species, the black-tailed jackrabbits do not live in burrows. During the daytime, they rest in shallow scrapes known as "Forms", or dig a hole in the soil and generally, under some vegetation cover.

In order to save itself from predators, this jackrabbit relies on its acute hearing power and speed. Its running speed can be as much as 64 to 72 km per hour (40 to 45 miles per hour) and it can leap as high as 19 feet in a single jump. Its natural enemies include ferruginous hawks, eagles, and red-tailed hawks. The mammalian carnivorous animals which are likely to pose a danger to its survival include foxes, bobcats, and coyotes.

Although the black-tailed jackrabbit is a solitary animal, it often forages and rests in groups. Each individual of the group relies on other's ears and eyes to detect the predators.

Breeding among the species found in southern regions can occur throughout the year. In forests, females are capable of breeding before they reach one year of age, but it is found in very rare cases. A healthy female can give birth to four or five litters every year with one or eight young ones per litter. The weight of the wild leverets can be about 80 to 100 gm (2.8 to 3.5 oz) at birth but in captivity and when well-fed with good food, the weight of a young one can reach up to 155 gm. Gestation period of the jackrabbit is 45 days and although babies are precocial (independent and active from birth), the mother nurses her babies for full 12 weeks.

Picture of the black-tailed jackrabbit by Dana Krempels, licensed under GFDL

The Black-tailed jackrabbit is listed as Least Concern (LR/lc), lowest risk. Does not qualify for a more at risk category. Widespread and abundant taxa are included in this category, on the IUCN Red List of Threatened Species

Namings for the blacktailed jackrabbit

Some facts about the
Black-tailed jack rabbit