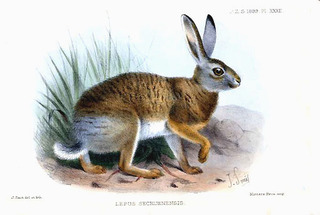 The Woolly hare is listed as Least Concern (LR/lc), lowest risk. Does not qualify for a more at risk category. Widespread and abundant taxa are included in this category, on the IUCN Red List of Threatened Species

Namings for the woolly hare

Facts about the woolly hare

Tibetan hare (Lepus oiostolus) is sometimes so tame that you can almost step on it.

Woolly Hare or Lepus oiostolus is listed on the IUCN Red list (1996) as Lower Risk/Least Concern .

Contributors "Wild And Woolly Hare" is rated: (There have been 7 votes so far.

The Woolly Hare is wide-ranging, and often travels on the mountain slopes.