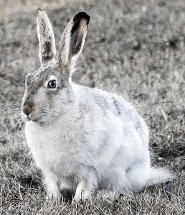 The White-tailed Jackrabbit (Lepus townsendii), Prairie Hare is a native of the western parts of North America. Although briefly reputed as an extinct species, according to some observations it is still found in the Yellowstone National Park.

Unlike other rabbits, the white-tailed jackrabbit is quite large in size with extra large ears. The color of its fur varies according to the season and the habitat. It becomes grayish brown or yellowish brown during summer and gray or white underneath. Its face and throat are darker. In southern regions, the back of these rabbits remains buff-grey while their sides turn white in winters. Since there is snow all over the northern regions, their coat also turns white. Their face, feet, back, and ears look light buff in color. Their tail remains white throughout the year and the ears are white at the edges.

The white-tailed jackrabbit is most commonly found in grasslands, green pastures, and forests at high altitudes. It feeds on herbaceous plants and grasses. In winters, the food is scarce and so, they depend on barks and plants that come out of the snow. Sometimes, more than ten leverets are born per litter with an average of five. The gestation period lasts for 5 to 6 weeks. The babies are fully furred at birth with their eyes open. The mother nurses the babies for about one month and then, they are weaned out.

White-tailed jackrabbits are very active all the year round and like to roost solitarily. They are very active in the morning, at late afternoon, and at evening when it is cool. The rest of the day, they rest in the shallow depressions at the base of bushes or in hollow spaces in snow. Males have occasional fierce battles but injuries are not seen on their bodies. Among other jackrabbits, the white-tailed jackrabbits occupy the greatest range. The home range of these rabbits extends up to 2 to 3 km in diameter. Their population fluctuates according to the availability of food. In the Northwest regions, their population has been reduced considerably due to the development of agriculture and overgrazing. The white-tailed jackrabbits have many predators like all lagomorphs.

These rabbits are found over a very wide range. Along to the west of Central Canada, they are found in south-central California. They also seem to exist in the United States in the southwest region of Ontario, south of Wisconsin, east of Alberta, and the Great Plains of Saskatchewan.

The White-tailed jackrabbit is listed as Least Concern (LR/lc), lowest risk. Does not qualify for a more at risk category. Widespread and abundant taxa are included in this category, on the IUCN Red List of Threatened Species

Namings for the whitetailed jackrabbit

Some facts about the
White-tailed jackrabbit