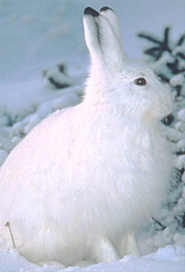 The Snowshoe Hare (Lepus americanus), an exclusively North American Lagomorph, has three to four litters in the breeding season. She can conceive again while she is already pregnant with young because of two uteri. Gestation periods average 37 days; anywhere between two and seven offspring are born. They live under brush at least one meter tall to keep themselves safe from terrestrial threat. In other areas where birds are prevalent they will seek shelter in three-meter forest understory. Fifteen meters of horizontal foliage is required for cover and warmth. Here, the young are nested in a shallow depression called a form, rather than underground. The leverets are born ready to take care of themselves in this precarious environment. They grow 17 to 25 cm in size and approximately .9 to 2 kg in weight. The underbrush also serves as a place for a "Snowshoe" to groom and to feed its young. Their habitat is generally located in the higher latitudes of the continent but if the lower latitudes such as those in Virginia and the Carolinas have the same environmental conditions at the higher elevations, the hares will live there. Preferring coniferous undergrowth in winter and deciduous in the summer, their diet consists of a variety of greenery, buds, twigs, bark and berries.

The lifespan of the Snowshoe Hare living in the wild is one year. About 15 percent of the population survives five years. Every decade or so the population undergoes a dramatic change in number. Factors such as food, cover, disease and predators dictate their number. In lean times, the hares will roam up to eight kilometers in search of food. They will even eat dead mice and their own feces in an effort to obtain sufficient nutrients. The Snowshoe Hare is by no means a threatened species, despite the vast numbers of animals that prey upon it, such as owls and hawks, red and ground squirrels, coyotes and bobcats, just to name a few. When danger is present they will thump a hind foot to alert others. Their ability to leap three meters in a single hop and change direction mid-air can confuse a fox in hot pursuit. Two distinctive coats that serve as camouflage depending on the season, are due to two sets of hair follicles. Still, they must take care to forage only at dusk, just before daybreak, at night and cloudy days. Venturing out on moonlit nights, however is risky. Lepus Americanus is a marvelous example of Nature's careful monitoring of a species, in that the best compensations for its survival are in-born.

The Snowshoe hare is listed as Least Concern (LR/lc), lowest risk. Does not qualify for a more at risk category. Widespread and abundant taxa are included in this category, on the IUCN Red List of Threatened Species

Namings for the snowshoe hare

Some facts about the
Snowshoe rabbit