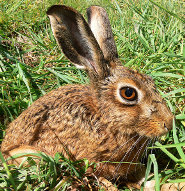 The Cape Hare (Lepus capensis) is a common hare found on the continent of Africa, and has spread to other locations as well, such as the Middle East, Asia, and Europe – and also was unfortunately spread to Australia where it is an alien species. Although the species is a least concern species – it does have twelve known subspecies, and any one of those could be at risk of extinction due to lack of empirical data on their numbers. Additionally, although the numbers are not known, it is likely and predicted that there will be a decline each year, and that their numbers are slowly dwindling down although currently there are a large number.

The hare is usually brown, with large acute eyes and good vision, topped off by almost propeller shaped ears. They breed all year and have between one to two offspring in each litter, and a female can give birth to nearly eight litters per year. Their preference for using shrubs and small plants rather than grass is known, and this behavior usually occurs in the summer time. They prefer open areas; however have been known to be in other settings and altitudes. The species is generally adaptable to many conditions and terrain within limits of temperature. Diet is likely dependant on where they are, however data is lacking on specifics. The Type species, or the one which is commonly used as the name for the species, is Lepus capensis capensis (much like Homo sapiens sapiens), while the rest are L.s. aquilo, L.s. carpi, L.s. granti, L.s. aegyptius, L.s. hawkeri, L.s. isabellinus, L.s. sinaiticus, L.s. arabicus, L.s. atlanticus, L.s. whitakeri, L.s. schlumbergi, and possibly more yet unknown. The Genus is Lepus of which the Hares and Jackrabbits are members, and there are ten known Subgenus in Lepus. Lepus belongs to the Family Leporidae, of which include the rabbits and has eleven Genera in all. Leporidae belongs to the Order Lagomorpha, of which Pikas are the only other Family. Lagomorpha belongs to the Superorder Euarchontoglires within the Clade Glires. Within this Clade they are related to Rodents, and in the Superorder they are related to Euarchonta, of which Primates (us too) are members. Euarchontoglires belong to the Infraclass Eutheria (placental mammals), which belongs to the Subclass Theria which are all mammals except the monotremes.

The decline of the Cape Hare is dependent on several factors, and the future decline will be influenced by actions or inactions of local governments and people. Because of its range in resource rich areas they are being displaced by urban developments and habitat loss, along with fragmentation (where pockets of wildlife are separated by human development), poisoning, pesticides, hunting, competition with livestock, road kill from vehicles, climate change, and predation by human kept animals in addition to their natural predators. The Cape Hare is protected by law in several places such as the United Arab Emirates, Jordan, Oman, and Bahrain.

Like all Lagomorpha the Cape Hare practices coprophagia, or the consumption of their own droppings. Because their digestive tracks are not as complex, they have feces which are half digested and are re-consumed – however they also have normal feces which they do not re-consume.

Picture of the cape hare by Benjamint444, licensed under GFDL

The Cape hare is listed as Least Concern (LR/lc), lowest risk. Does not qualify for a more at risk category. Widespread and abundant taxa are included in this category, on the IUCN Red List of Threatened Species

Namings for the Cape hare

A young / baby of a Cape hare is called a 'leveret'. The females are called 'doe or jill' and males 'buck or jack'. A Cape hare group is called a 'band or down'.

Some facts about the
Cape hare