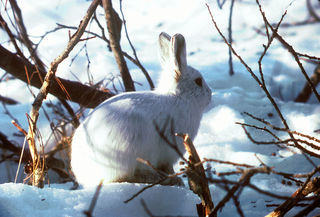 The Alaskan hare is listed as Least Concern (LR/lc), lowest risk. Does not qualify for a more at risk category. Widespread and abundant taxa are included in this category, on the IUCN Red List of Threatened Species

Namings for the Alaskan hare

Facts about the Alaskan hare

Lepus othus is restricted to western Alaska from the Alaska Peninsula to just north of the Seward Peninsula near Kotzebue (Klein 1995).

Alaskan Hare or Lepus othus is listed on the IUCN Red list (1996) as Lower Risk/Least Concern .

A similar species known as the mountain hare (Lepus timidus) can be found throughout northern Europe and Asia, while the tundra hare (Lepus othus) is found in Alaska. (Full text)