Rhesus Monkey - More Human than We Care to Admit 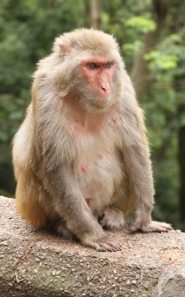 The rhesus monkey (Macaca mulatta) was just another obscure mammal to most people until the horrific results of experiments done by Harry Harlow were televised. Harlow removed newborn monkeys from their mothers and raised them in isolation to see how if this would impair their psychological functions. It certainly did. Harlow’s experiments would also make people question the usefulness of animals in experiments.

Perhaps the reason why the general public was so disturbed by Harlow's experiments was because of the strong similarities between a human’s face and the monkey’s face. Rhesus monkeys have mostly hairless faces, except for the tops of their heads and around their mouths. Baby rhesus monkeys have completely hairless pale pink faces. Although their noses are shaped differently, rhesus monkeys are capable of producing many human-like facial gestures, including frowning and smiling.

Far from laboratories, rhesus monkeys are normally found in South and Central Asia. They are adaptable to many environments, from Indian temples to Chinese forests. Other countries they are found in include Korea, Thailand, Pakistan, Afghanistan and Malaysia. They can also survive in cities, grasslands, swamplands and mountains with elevations up to 8,200 feet (2,500 meters.) Some were introduced to the swampy Lowland country in South Carolina and to the forests of Puerto Rico. These colonies still survive.

They live in troops made up of both males and females. Although troops of 200 monkeys have been documented, the average troop size is about 20. Males are the troop’s main protectors and routinely boss females around, but the females are the ones that decide when and where the troop goes. The oldest females learn where the best sources of food can be found. Rhesus monkeys eat a varied diet of fruits, tree bark, insects, and the tender shoots of plants. They also enjoy raiding crops of human vegetables and grains, which makes them pests in some areas.

Rhesus monkeys, sometimes called rhesus macaques, are covered in thick brownish-grey fur, except for their faces. Their pinkish-red ears protrude from the fur. They have short tails. Males are larger than females. Males grow up to 21 inches (53 cm) long and tip the scales at 17 pounds (7.7 kg.) Females only grow to 19 inches (47 cm) and weigh an average of 12 pounds (5.3 kg.) Both males and females can store food in pouches which are similar to a hamster’s cheek pouches but not quite so dramatic.

Although rhesus monkeys live up to 30 years in zoos, they usually die in the wild by the time they are 5. Their main predators include man, dogs, weasels, crocodiles, large snakes, birds or prey and the increasingly rare Bengal and Amur tigers. Monkeys living near the ocean can be killed by sharks. Monkeys love swimming and even the presence of sharks does not deter them from taking to the water.

The Rhesus macaque, rhesus monkey is listed as Near Threatened (LR/nt), is close to qualifying for or is likely to qualify for a threatened category in the near future, on the IUCN Red List of Threatened Species

Namings for the rhesus monkey

Some facts about the
Rhesus monkey