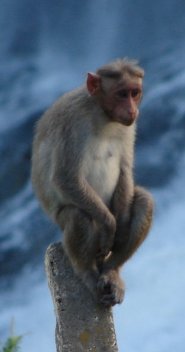 The Bonnet macaque (Macaca radiata) is a species of old world monkey that is commonly found in India at elevations of 2000 meters (about 6000 ft). Much like other macaques breeds, the pack maintains a dominance hierarchy of both male and females. Females are typically born into the role as 'alpha' leader, while males compete for it. While males are usually dominant over the females, this isn't always the case and there have been some reports of female bonnet macaque's being the pack leader.

Male bonnet macaque's typically weight more than females at around 9 kg (20lb), while females are about half that. The monkeys are typically covered in white, grey and brown fur while remaining bald on their face and ears. The color of their skin can range from a deep black to dark red to tan. Each monkey has a tail between 30 cm (11 in) to 60 cm (22 in) long.

The most interesting note about the bonnet macaque is the constant struggle for dominance. Breeding takes place only a few months of the year, with one female only giving birth to one child per birth, and the alpha male gets first pick of the females. Because of this, there are often power struggles amongst the males in the group. It's not uncommon for fights to break out, some proving deadly, just so another male can move up. In most cases a coalition will be formed and the new monkey will be accepted, usually at a higher rank than they were previously.

Females, on the other hand, have a much more laid back approach to the situation. They do not battle for dominance but are instead born into it. There have been a few rare cases when females were forced to battle due to a low number of female spawn, but this is not the natural order of things.

The Macaca radiata feeds on several types of food, but the most common is fruit, nuts and seeds. The species stores this food in their cheeks while searching for more. In situations where fruit, nuts and seeds cannot be found, the breed may also resort to eating bugs or raiding the houses of humans for cereal, fruit, and nuts.

The species typically lives in wet forests, though they've also been spotted in urban areas. When kept in captivity, the breed can live around 30 years, however they rarely survive that long in the wild. Those who live in an urban environment are often killed by humans, cars and dogs while those in the wild are hunted by tigers, leopards, eagles, crocodiles, and pythons.

The bonnet macaque is currently listed as "Least Concerned" on the conservation status scale, meaning that there is currently no long term threat risk to the species.

Picture of the bonnet macaque by M.arunprasad, licensed under GFDL

The Bonnet macaque is listed as Least Concern (LR/lc), lowest risk. Does not qualify for a more at risk category. Widespread and abundant taxa are included in this category, on the IUCN Red List of Threatened Species

Some facts about the
Bonnet macaque