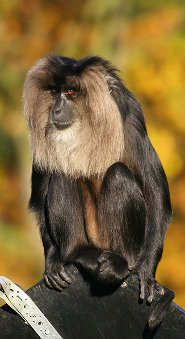 The liontail macaque (Macaca silenus) is known to German speakers as the "Beard Ape." This nomenclature, describes the silver-colored mane that encircles the lion-tailed macaque’s face. Aside from this mane, the rest of its appearance is dark. The hair is either a very dark brown or black, and the face is black. Thus, the beard resembles the grey beard of an old man with dark hair.

Living along the western coast of India, these monkeys are naturally found in Karnataka, Kerala and Tamil Nadu. Researchers believe that approximately 30,000 to 35,000 lion-tailed macaques can be found in this region. Due to this small population and the small geographical area they are found in, these primates are classified as endangered.

The endangered classification of lion-tailed macaques has been a tenuous issue over the past few decades. From 1977 to 1980, India’s main environmental debate was over the region of these monkeys. Thankfully, they have survived, mostly because of a strong public effort to save them. A little over a decade later, in the mid-1990s, fourteen troops of lion-tailed macaques were observed in the valley that was so fiercely fought over earlier. In the surrounding areas, several smaller, but self-sustaining, groups have been discovered.

The Lion-tailed macaque, liontail macaque, wanderoo is listed as Endangered (EN), considered to be facing a very high risk of extinction in the wild, on the IUCN Red List of Threatened Species

Some facts about the
Liontail macaque