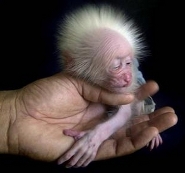 The bear macaque or stump-tailed macaque (Macaca arctoides) is a large Asian monkey with a short tail and a short survival expectancy. The International Union for the Conservation of Nature (ICUN) lists this species as "vulnerable", meaning it can go extinct during this century. Stump-tailed macaque populations have plummeted 20% since 1992 and are almost extinct in Thailand and thought to be extinct in Bangladesh. They can be found in many medical research laboratories. Experiments on stump-tailed macaques resulted in at least two drugs for hair loss due to male pattern baldness.

Baby stump-tailed macaques are especially prone to meat-eating raptors. Both babies and adults are on the menu for clouded leopards, common leopards and feral dogs. But their worst predators are humans. Not only do humans hunt the macaques for meat and body parts for Traditional Chinese Medicine, but humans will wipe out the adults in a troop in order to sell the babies for the exotic pet trade. Humans are steadily destroying the macaque’s environment through overdevelopment. Once it ranged all throughout Asia from China down to India and across to Vietnam. Now it can be rarely found in the wild.

Stump-tailed macaques are covered in thick brown fur over grey to black skin. The shade of brown varies from macaque to macaque, from a dark chocolate to a golden tan. Babies are born white with pink skin, but become darker as they age. Adult macaques are hairless on their hands, feet, faces and stumpy hamster-like tails. Older stump-tailed macaques, like older humans, suffer from baldness on their heads. 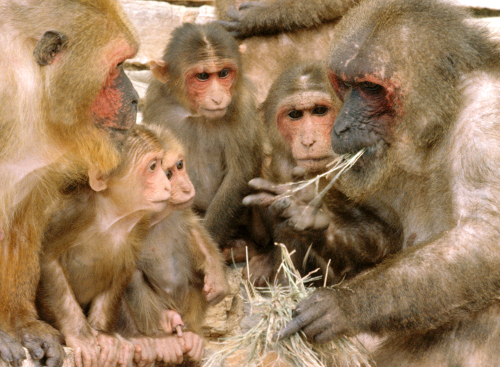 Picture from Peace Lessons from an Unlikely Source by Frans de Waal, licensed under the Creative Commons Attribution 2.5 Generic license.

Stump-tailed macaques live in small groups called troops. Although troops of 60 macaques have been recorded, most troops contain less than 30 individuals. Troops are of mixed sexes and sometimes overlap with other troops when food is plentiful. Males and females mate with whomever they choose, although the highest-ranking male gets preference. But if low-ranking males are patient, they can steal away into the bushes with a female. Females often choose their males instead of the other way around. They remember which males found them food and gave good grooming. Females only come into season every two years so they need to be choosy.

Females do all of the work of caring for the young after a 177 day gestation. She nurses the baby for nine months and then teaches the baby where to find food such as frogs, shellfish, bird eggs, small birds, seeds, roots, leaves, flowers and insects. Bear macaques will also strip farmer’s fields, which make local humans unsympathetic to the idea of conservation.

The Bear macaque, stump-tailed macaque, stumptail macaque is listed as Vulnerable (VU), considered to be facing a high risk of extinction in the wild, on the IUCN Red List of Threatened Species

Some facts about the
Stump-tailed macaque