The Tailless Tenrec: Surprise, I do have a tail! 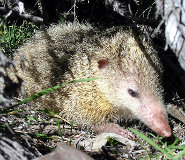 The Tailless Tenrec (Tenrec ecaudatus), also known as the Common Tenrec, is a species of mammal in the Tenrecidae family. The tenrec itself resembles a shrews or hedgehog. The tailless tenrec is most commonly found making its home in the islands near Madagascar, Mauritius, Réunion, and Seychelles. The natural habitat of the tailless tenrec is anywhere that is a little humid and warm. tailless tenrecs make there home in subtropical or tropical dry forests, lakesides, humid savanna, moist savanna, shrubland, high-altitude shrubland, subtropical or tropical lowlands and grassland, arable lands, domestic gardens, and urban areas. It is unique to the Madagascar and Indian Ocean area.

The Tailless Tenrec is also the largest of the land dwelling species that make up the many types of tenrec. At a typical length of 26 to 39 centimeters (10 to 15½ inches) in length and a weight of about 1.5 to 2.5 kg (3¼ to 5½ lb), the tailless tenrec is also one of the world's largest insectivores-- that is, an animal whose primary diet is insects. With its round, beady eyes and medium-length, soft gray to reddish-brown fur, it is also one of the most adorable insectivores. However, petting the tailless tenrec might not be a good idea, as it also has sharp spines along its body for protection. When it feels threatened, the tailless tenrec will shriek, make its spines puff up into a crest, jump out the way, and if it's cornered even buck and bite. While the tenrec mainly eats small insects hiding among leaves, it will occasionally eat any hiding frogs it its main food source is scarce enough.

The tailless tenrec will make a home out of nearby grass and leaves, sheltering its nest by building it underneath a rock, log or bush. It also has a large family-- the typical female tailless tenrec gives birth to a litter of about 15 to 20 babies at a time, though the highest recorded tenrec litter was 32 young. When the tailless tenrec is first born, they will usually have a fur coat that has black and white stripes, and may look almost mouse-like in appearance. The most curious fact of all is that despite being commonly known as the tailless tenrec, most tailless tenrec actually do have a tail! However, this tail is very small- only about 1 to 1.5 centimeters (⅜ to ½ inches) in length.

Picture of the tailless tencrec by Markus Fink, licensed under GFDL

The Tailess tenrec is listed as Least Concern. Does not qualify for a more at risk category. Widespread and abundant taxa are included in this category, on the IUCN Red List of Threatened Species

Some facts about the
Tenrec