The order of insectivora contains small mouse-to-mole shaped like mammals that are insectivorous. Recently, several rearrangements by scientists have been made and species have been placed out of this order, in an order of their own, including colugo's, tree shrews and elephant shrews. Some argue that golden moles and tenrecs should also be placed in a separate order containing all african groups and call them "Afrotheria". The largest family is the family of Soricidae, the shrews. Some are venomous, like Elliot's short-tailed shrew.

The Erinaceidae family contains the hedgehogs and gymnures. As we all know hedgehogs are covered with sharp spines, even when they are babies (see picture). Gymnures have another defense mechanism, they produce a foul smell when being threatened. Did you know that hedgehogs are resistant to snake venom?

Solenodontidae, containing the Cuban Solenodon (known as the Almiqui in Cuba) believed extinct until rediscovered in 2003 in the eastern mountains in Cuba. The family contains Solenodon paradoxus, which is also venomous. The Solenodon is one of only a handful of mammals that are venomous. Tenrecidae, which are found on madagascar and the west of Africa. All members of insectivora have feet with five digits, unlike rodents who have only four. Neither the pollux (the first digit of the forelimb, the thumb with humans) or the hallux (the big toe) is opposable.Chrysochloridae, the golden moles, are common in southern Africa, where they practice their burrowing activity.

Unlike the members in the Talpidae family, the golden moles hold their forepaws under their body instead of at the side. 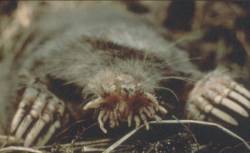 Talpidae, containing Desmans, moles, and relatives. Some are aquatic like the Desmans, or the Star-nosed mole (see picture), which feed on the bottom of small lakes. It can be found in eastern Canada, and the north-eastern United States.