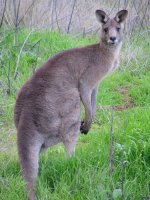 Diprodontia is a very diverse order of marsupials including the koala, kangaroos, possum, wallaby, and their relatives, about 130 species in total. They all live in Australasia and they are recognized by their second and third digits of the hind feet fully fused except for the claws. They have soft fur and a single pair of developed incisor teeth in the lower jaw (hence the name:di is two; proto is front; odontia is teeth), and sometimes an additional pair. When around 50,000 years ago the first humans arrived in Australia, some members of this order became extinct, with human activities such as hunting and setting fire to forests. In the order of Diprodontia several new mammal species have been discovered in the last 25 years, a rare occasion.

Some characteristic species in the order Diprodontia