The Hill wallaroo - Dwarf Kangaroo of the Australian Hills 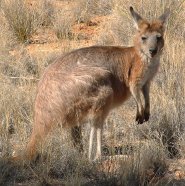 The Hill wallaroo (Macropus robustus), also known as the Common wallaroo or Hill kangaroo, also is a small, stocky marsupial found throughout mainland Australia. Indeed it could be considered rather much the "hobbit" of the kangaroo family in physical terms. Sexual dimorphism is pronounced in this species, the male being almost twice the size of the female. A male Hill wallaroo typically weighs about 30 kilos or 65 lbs, and may be up to 140 centimeters or over 4 feet in length. His female counterpart will average about 16 kilos or 35 lbs in weight, and can grow up to about 3 feet in length. Unlike better known cousins, such as the Eastern Grey Kangaroo, the Hill wallaroo is primarily solitary and nocturnal. The color of the pelt varies from ruddy brown to a very dark shade of grey, approaching black. Unlike other kangaroos which favor open plains country, the Hill wallaroo's favored abodes are rocky hills and cairns, over which it can skip with great agility, utilizing abundant ledges and caves for both shade and protection from predation.

Macropus robustus is well adapted to the desert continent it inhabits, being able to derive much of its water from vegetable sources and able to go as long as 90 days without imbibing a drop. The Hill wallaroo is an opportunistic breeder with no set mating seasons, although females will often cease being receptive during prolonged and intense periods of drought. A single offspring is born to the female after a gestation of approximately a month, whereupon, as with other kangaroos, it crawls unaided to its mother's pouch and begins to suckle a teat. As with other marsupials, most development occurs outside the womb. The offspring is weaned after approximately 14 months. Male Hill wallaroos are ready to breed when a year and a half old, whereas females of the species reach sexual maturity after about two years. There are four subspecies of Macropus robustus, these being the Eastern, Euro, Northern Woodland, and Barrow Island varieties. The Barrow Island type is the most differentiated of the four subspecies, growing to be about as half as large as its mainland counterparts. The Hill wallaroo is not currently considered endangered or threatened, although the Barrow Island subspecies is considered vulnerable, owing to its small population of only about 1,800 individuals.

The Common wallaroo, hill wallaroo is listed as Least Concern (LR/lc), lowest risk. Does not qualify for a more at risk category. Widespread and abundant taxa are included in this category, on the IUCN Red List of Threatened Species

Some facts about the
Wallaroo