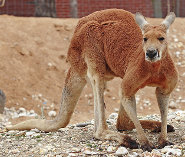 The red kangaroo (Macropus rufus) is a large kangaroo with short and red-brown fur which gradually becomes paler towards its buff and limbs. It has a square-shaped muzzle and long ears that are pointed at the ends. Females are lighter than males and their color is blue-gray with a little brown touch. The lower part of females is pale gray. The females found in arid zones have almost the same color as that of males. The hind limbs of red kangaroos are muscular and their forelimbs have small claws. Their legs work like rubber bands. A male can leap up to as much as 30 ft (9 meters) in a single leap.

The red kangaroos are known for maintaining their internal temperature at about 97°F (36 degrees Celsius) using physical, behavioral, and physiological adaptations. This includes taking shelter in the shade when the temperature is high, sweating, licking, and panting its forelimbs, and having an insulating layer of fur. These kangaroos are mostly found in the central parts of Australia. They roam in small groups known as mobs. They prefer roaming in plain regions where trees and other vegetation are scarce.

They are mainly active when it is cool in the evening or at night and usually prefer solidarity or roam about in small groups. Each mob consists of three to ten kangaroos but sometimes there can be several hundreds of them in a group. Male kangaroos are not defensive and there can be fights among males for the female when it comes into heat and the largest male becomes dominant over most of the females. The red kangaroos are crepuscular and nocturnal and spend their daytime relaxing or sleeping.

This is an herbivorous species that feeds on grasses and a variety of other vegetation. It can spend long periods without water as long as green vegetation is available and also has the ability to suck moisture from green plants.

There is no specific time for breeding among red kangaroos. Breeding period prolongs all year round. The female does not give birth until its first baby leaves the pouch. This unique ability to delay birth is found only in red kangaroo females. This ability to delay birth is known as embryonic diapause. The gestation period lasts for 33 days. The baby leaves its mother's pouch permanently when it is 235 days old but continues to suckle up till one year of age.

Picture of the red kangaroo by user Fir0002 for Flagstafffotos, licensed under GFDL

The Red kangaroo is listed as Least Concern (LR/lc), lowest risk. Does not qualify for a more at risk category. Widespread and abundant taxa are included in this category, on the IUCN Red List of Threatened Species

Namings for the red kangaroo

Some facts about the
Red kangaroo