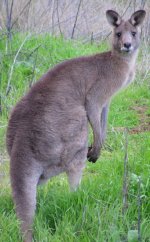 Eastern grey kangaroos (Macropus giganteus) can be found along the eastern coastlines of Australia, South Wales, and parts of Eastern Tasmania, and Queensland with the exception of western Cape York. Eastern grey kangaroos are often confused with the West grey kangaroos, but are distinguishable by their more even distribution of fur colors. The eastern grey also has a much lighter face complexion than the western. Did you know a baby kangaroo is called a 'joey'? And that a group is called a 'mob'? These 'mobs' have one dominant male and about 2-3 females with young, and about 2-3 young males. The only natural predator, besides man, is the dingo, but the effect is not significant. The kangaroo industry is huge, considering the kangaroo industry is worth AUD$200 million per year and directly employs 4000 people, many of these jobs are in remote areas with few other employment opportunities (source, note: this is old, it probably is a lot more). The Viva ( Vegetarians International Voice for Animals) movement is calling it the largest wildlife massacre on the planet. The kangaroo industry produces kangaroo leather that is also used in soccer boots. Adidas produces one type of soccer boot that uses this leather: the predator (what an appropriate name). From Viva's website:

"This (soccer boot) industry is vital to the kangaroo industry.

Without it underpinning kangaroo skin prices the entire industry would be at risk. Adidas have received to date over 10,000 emails complaining about their use of kangaroo leather...and are obviously concerned about damage to their image."

In response to critics, the Kangaroo industry association of Australia responds on their website with:

"Commercially utilising wildlife, especially iconic species like kangaroos, challenges the widely publicised view of conservation pushed by the modern NGO conservation movement. Many people living in New York, London, Paris or Sydney and brought up on an ‘entertainment diet’ of wildlife documentaries would believe ALL wildlife is endangered. The fact that some species, like the commercially harvested kangaroos, are super-abundant and can be sustainably harvested as a resource does not get much publicity from groups like Greenpeace who are dependent on a ‘concerned’ public for their annual revenue.

For other people the thought of killing an attractive wild animal such as a kangaroo goes against their deeply held love of animals." (source)

Please share your thoughts on this and take care.

The Eastern grey kangaroo is listed as Least Concern (LR/lc), lowest risk. Does not qualify for a more at risk category. Widespread and abundant taxa are included in this category, on the IUCN Red List of Threatened Species

Namings for the eastern gray kangaroo

Some facts about the
Eastern gray kangaroo