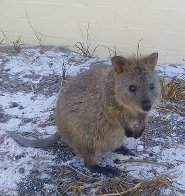 While European explorers have variously mistaken them for rats and wild cats, quokkas (Setonix brachyurus) are actually small marsupials, morphologically similar to wallabies and, to a lesser extent, kangaroos but typically smaller. Quokkas can weigh up to 5 kilograms (about 11 lbs); growing to just 54cm (21.3 inches) tall and 30cm (11.8 inches) long.

Quokkas are adapted to the warm climate of Western Australia and the largest population of them is found on Rottnest Island near Perth. Indeed, the island, somewhat indirectly, is named for the presence of quokkas. In 1696, an early explorer of Western Australia (then New Holland), the Dutch sea captain - Willem de Vlamingh, considered the quokkas to be vermin and named the island 'Rottnest', which is Dutch for 'rat nest'. This less than flattering name has, it seems, stood the test of time.

Rottnest Island is something of a safe-haven for quokka, as it is free of fox and cats that were, in fact, only relatively recently introduced to the island by European settlers. Moreover, laws on the island mean that it is illegal for visitors to interfere with the animals in any way. However, the quokkas' complete lack of fear of humans, which means that they remain highly vulnerable to abuse. The animals, therefore, require dense vegetation for cover. On the mainland the quokka are sympatric with Gilbert's Potoroo, another marsupial, sometimes called a rat-kangaroo.

Quokkas are mainly nocturnal and exclusively herbivorous, feeding on grasses and leaves. However, they are thought to be able to survive for extended periods without any food or water. The Rottnest population is thought to have suffered a certain degree of ill health due to being fed inappropriate food-stuffs by tourists, including bread. Visitors to the island are, as outlined above, now requested not to feed or handle these animals.

Quokkas can breed at any point during the year, however, on Rottnest Island their breeding period is usually confined to late summer. Females produce just one joey per year with a gestation period of four months. The joey will reside in the mother's pouch for a further 25 weeks and will continue to be suckled by the mother for an additional ten weeks after that.

Perhaps the most fascinating (and disgusting) facts about the quokka is that they recycle a small amount of their own waste products. Such caecotrophy is common in the animal kingdom and is practiced by many other mammals, including rabbits. It allows for the re-processing of any material that has made its way through the entirety of the animal's digestive system without being fully digested. Such coprophagous behaviour can be expected to be most common during times of low food abundance or extremely high physiological demand (e.g. during pregnancy and/or lactation).

Picture of the Quokka on Rottnest Island WA Australia 2008, by Gavin Williams, licensed under GFDL

The Quokka, short-tailed wallaby is listed as Vulnerable (VU), considered to be facing a high risk of extinction in the wild, on the IUCN Red List of Threatened Species

Some facts about the
Quokka