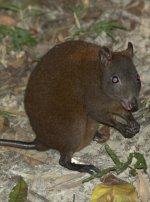 The Musky Rat-kangaroo (Hypsiprymnodon moschatus) is the smallest kangaroo that has been most recently classified in the Hypsiprymnodontidae family along prehistoric rat-kangaroos. Some earlier scientists classified it as a Hypsiprymnodontinae subfamily belonging to the Potoroidae family. It generally dwells in the dampest areas, near rivers and creeks, of tropical rainforests in northeast Australia and New Guinea. It inhabits no other places but the lowlands and up to 1200 meter- highlands of the Wet Tropics. This terrestrial marsupial nests on a dwelling of dried fern and leaves usually in a Lawyer Vine clump.

The Musky Rat-Kangaroo is the smallest among macropods. The length is an average of about 230 millimeters and the weight about 520 grams, making the creature the smallest among all kangaroos. Its size is like a big guinea pig or a lot smaller brushtail possum or rabbit. Its closest modern-day living relatives are the wallabies and kangaroos. Aside from being the smallest, it is also considered as most primitive among macropods, with features similar to those of ancestors that resembled possums. This marsupial is the kangaroo family's only remaining member that retained a prehensile tail, which measures about 145 millimeters. The tail is scaly and bare, and it reminds one of glossy leather. Like possums and unlike kangaroos, it also has an opposable digit and first toe on its hind foot, enabling it to climb up fallen trees and branches.

This marsupial can also have more than just one young in its pouch unlike the single baby trait of a kangaroo.

It feeds mainly on fruits and seeds at daytime. The Musky Rat-Kangaroo plays a vital role as a dispersal agent in the regeneration of plants in rainforests. It also eats small invertibrates. Its stomach, however, is simpler than those of its macropod relatives.

Interesting fact: Unlike kangaroos that jump on two legs, the musky rat-kangaroo hops like a bunny on all of its four legs. It pushes its longer hind legs in front outside its shorter fore legs when galloping.

The Musky rat kangaroo is listed as Least Concern (LR/lc), lowest risk. Does not qualify for a more at risk category. Widespread and abundant taxa are included in this category, on the IUCN Red List of Threatened Species

Namings for the musky rat kangaroo

Some facts about the
Musky rat kangaroo