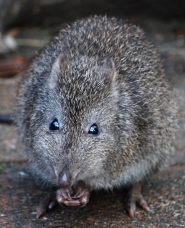 The long-nosed potoroo (Potorous tridactylus) is a small marsupial that performs a big job for the Australian environment. This small, peculiar-looking marsupial constantly digs at the ground looking for food. In this way, it acts as an earthworm to help till the soil. Australia does not have any earthworms but does have termites and the long-nosed potoroo, which is a lot more physically attractive than a termite.

There are four different species of potoroo in Australia. The name is similar to "kangaroo" and the two types of "roos" share many similarities. They both grow their babies or joeys in pouches rather than in a womb. They both hop. But unlike the kangaroo species, potoroos are all in danger of extinction because of habitat loss and falling prey for cats and foxes. These formidable predators were introduced to Australia with the first European colonists. Long-nosed potoroos need areas of thick undergrowth to grow the food they need. These areas are rapidly disappearing.

The long-nosed potoroo looks like a cross between an elephant shrew and a kangaroo. It has wide forehead that tapers to a long, pointed nose. The tip of the nose is hairless and pink. The body is covered in short fur colored in shades of brown and gray. The forelegs are much shorter than the hind legs but are muscular enough for digging. The long, slim tail is mostly furred. Males and females are hard to tell apart.

Males and females grow to a similar size and weight. Adults weigh up to 2.86 pounds (1.3 kilograms.) From nose to rump, adult long-nosed potoroos grow to a length of 14.17 inches (36 centimeters.) This is about as large as a rabbit. The long tail can grow up to 9.05 inches (23 centimeters.) Long-nosed potoroos can use the tail to help balance when they sit up to use their forelegs for eating, digging or hopping.

Long-nosed potoroos are mostly active at night, although sometimes they come out from their burrows during the day. They prefer to move under cover of long grasses or plants. They create escape routes to underground burrows in these grasses, meticulously removing any debris from these paths that may trip them up as they race away from predators. They feed mostly on fungus, but also on bulbs, roots, seeds and occasionally insects.

Males become sexually mature when they about 11 months old. Females need to be between one and 2 years old. They breed year round. After a 38 day gestation, the female gives birth to one or two embryos, which crawl into her pouch, find a teat and remain there for the next four months. Mom turns them out of the pouch when they are 6 months old. In captivity, long-nosed potoroos live up to 7 years.

Picture of the long-nosed potoroo by Peripitus, licensed under GFDL and the Creative Commons Attribution-Share Alike 3.0 Unported

The Long-nosed potoroo is listed as Least Concern (LR/lc), lowest risk. Does not qualify for a more at risk category. Widespread and abundant taxa are included in this category, on the IUCN Red List of Threatened Species

Some facts about the
Potoroo