The Tasmanian Pademelon - The Runway Makers 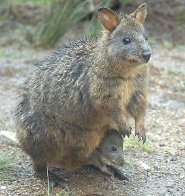 The Tasmanian Pademelon (Thylogale billardierii) is one of Australia's completely unique animals. Their Latin name translates to Billardière's pouched-weasel. The Pademelon is a stocky mammal that has gray to dark brown fur. These kangaroo-like animals possess shorter legs and tails than their distant relatives the Wallaby and Kangaroo have. The males are twice as big as the females. Males typically weigh in at an impressive 8 kilograms, or 17.6 pounds, while the females only weigh around 4 kilograms, or 8.8 pounds. There have been cases of males found as heavy as 12 kilograms, or 26.4 pounds. Similarly, female Pademelons have grown to weigh as much as 10 kilograms, or 22 pounds. These larger sized Pademelons are not common.

The Pademelons only live in Tasmania today. It is widely believed that they used to dwell on the Australian mainland before Europeans arrived, bringing other predators with them. The animals' habitats are mostly rain forests, forest gullies, and coastal scrub areas. Nocturnal animals by nature, Pademelons require the presence of clearings nearby in order to graze by night. They also need denser undergrowth in order to sleep during the day. The best place to actually see the Tasmanian Pademelon is in the Mt. William National Park of Tasmania. Here, dry woodlands and coastal heath are both preserved in the north east of Tasmania. Tasmanian Pademelons' ranges can be extremely large, covering 170 hectares, or 420 acres. These amazing animals will frequently travel as much as 2 kilometers, or 1.25 miles, through the forest on any given night. Yet, when they reach the edge of a forest, the Pademelons do not often come out farther than 100 meters, or 109 yards, in order to graze for food in patches of grass.

The Tasmanian Pademelons are vegetarians. They only feed on plants that grow lower to the ground. Included in their diet are green shoots, grasses, seedlings, shrubs, and herbs. Clearings tend to be richer in these types of foods on which they thrive. As they eat forestry industry planted seedlings, the Pademelons have come into conflict with foresters.

In Tasmania, the Pademelons have few predators. They are hunted by Eagles, Tasmanian Devils, and spotted quolls though. There used to be an abundance of Pademelons on the Australian mainland. This all changed with the introduction of the foxes brought from Europe. As the foxes multiplied, there were simply too many predators after them on mainland Australia, and they became extinct on the mainland. Because no foxes live in Tasmania, the Tasmanian Pademelon proves to be quite common there.

A unique feature of these Pademelons is their one of a kind runways that they create. These cleared tracks that they make through low lying vegetation are easily spotted. These animals generally turn out to be territorial and loners by nature. Once in a while, they are seen feeding near one another, though this is uncommon. The animals prefer to be alone, except for of course the mothers and their babies who depend on them for care.

Picture of the tasmanian pademelon by PanBK, licensed under GFDL

The Red-bellied pademelon, tasmanian pademelon is listed as Least Concern (LR/lc), lowest risk. Does not qualify for a more at risk category. Widespread and abundant taxa are included in this category, on the IUCN Red List of Threatened Species

Some facts about the
Tasmanian red-bellied pademelon