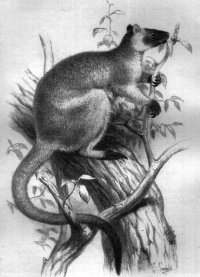 In general, tree-kangaroos hold special body traits that allow them to live up in the trees, and these are: unusually long tail, stronger limbs in front, bigger hind legs, curved claws and "spongy soles" which help them to grip well when climbing any tree. The Lumholtz's Tree-kangaroo (Dendrolagus lumholtzi) may be the smallest of its kind, while the Bennett's Tree Kangaroo is among the biggest. A Lumholtz's Tree-kangaroo head, face, shoulder, upper back, parts of the hindfeet, front paws, belly area, and a part of the tail are brown and black. Its lower back has a light-coloured covering, and Lumholtz's Tree-kangaroos have a fur running at the forehead's area, serving as a - just like a basketball player- a sweat band. Its ears are both rounded and short, while the undersurface of its body and the inside of the legs are a mix of grey and yellow. The male Lumholtz's Tree-kangaroo holds an orange hue at the belly, but this is a seasonal thing. Principally, these kangaroos are leaf-consumers, but they sometimes survive on flowers and fruits, if they are in a rainforest territory. Experts have also noted that a Lumholtz's Tree-kangaroo could eat leaves of lantana/wild tobacco, which are both invasive plants.

We are all used to reading an animal (whatever it may be), as either diurnal or nocturnal, but this kangaroo is something else. they fall under 'cathemeral'. This principally means they are active (intermittent) within the 24-hour frame of a day. In a brief sleeping session...of around an hour, its head just sinks within its chest, that or between the feet, all depends on where the kangaroo is. The experts have a strong hypothesis, and it is an intelligent one. As an end-product of low-energy diet, requirement of oneself to eat consistently prevents them from a longer sleeping period (it reminds me of some friends actually).

Interesting fact: These kangaroos are able to move their hind feet in independent fashion, and tree-kangaroos in fact, are the singular kangaroos which could navigate backwards...

The Boongary, lumholtz' tree-kangaroo, lumholtzi's tree kangaroo is listed as Near Threatened (LR/nt), is close to qualifying for or is likely to qualify for a threatened category in the near future, on the IUCN Red List of Threatened Species

Namings for the Lumholtz

A young / baby of a Lumholtz is called a 'joey'. The females are called 'flyer or doe' and males 'boomer or buck'. A Lumholtz group is called a 'mob, troop or court'.