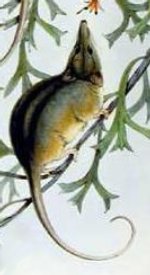 Scientifically, it is called (Tarsipes rostratus) but in layman's terms, it goes by the sweet name of Honey Possum or Noolbenger. Physically, they would range from 6 up to 9 centimeters, and lifespan of the typical possum (this kind) is from 1 to 3 years. Their habitat is in the southwest territories of Western Australia, and their 'residence' may be confined, but they are nowhere near our list of "threatened" animals.

A Honey Possum has a pronounced snout, a long tongue that is capable of taking in nectar and pollen. One thing crucial to these possums is floral presence, meaning a huge diversity of it, it would die if deprived of the necessary amounts of nectar. Its feet (both back and front) are build for climbing trees, and also for going through the undergrowth at noteworthy quickness. These possums are among the smallest known but their overall appearance is not exactly ordinary. Their toes hold sharp claws, and this makes it possible for them to hold on to both leaves and bark.

A Honey Possum is mainly nocturnal, but it does not mean it sleeps all the time during the day. It feeds in daytime if the weather is on the cooler side.

Their breeding is on the summer period, and they could start mating at the age of a half-year. A young Honey Possum would take shelter in the parent's pouch, feeding on the milk for about 8 weeks. After that length of time, they would have a fur coating that would allow them to survive on their own.

They could be found in shrub-filled lands, low woodlands and it goes without saying (as you can deduce from what I said earlier), their biology is connected to the presence and distribution of nectar-giving flowers. These possums travel in groups, feeding not only on pollen, but on insects as well.

Interesting fact: Some experts think that the Honey Possum is the one and only survivor of a long-extinct marsupial kind.

The Honey possum is listed as Least Concern (LR/lc), lowest risk. Does not qualify for a more at risk category. Widespread and abundant taxa are included in this category, on the IUCN Red List of Threatened Species

Some facts about the
Honey possum