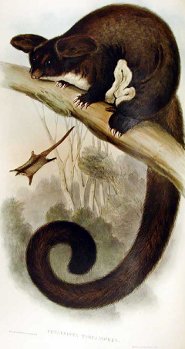 Greater gliders (Petauroides volans) are found only in the eucalyptus forests of Eastern Australia. They move silently in the trees and glide from trunk to trunk via a thin layer of skin that the animal pulls flat and uses as a parachute. The best way to find a greater glider in the forests is to search the bases of trees for their flattened pea-shaped droppings.

Greater gliders rely on large patches of tall trees in order to find enough food throughout the year. They eat mostly eucalyptus leaves and sometimes gum flowers. This specialized diet makes greater gliders extremely difficult to keep in captivity. Although listed as a species of "Lower Risk" they are dependent on old growth eucalyptus forests, which contain trees tall enough to provide protection, food and shelter. But eucalyptus forests are being cleared for agriculture and very few patches are protected.

Greater gliders come in several colors, including squirrel grey, cinnamon brown, dark brown, yellow and white. Their bellies and the underside of their tails are white, light yellow or vary pale grey in comparison to the rest of their fur coloration. Their heads are very small in comparison to the body, let alone the tail, and ends in a mouse-like snout. They have large, oval-shaped ears. The fur on the inside of the ears can be either dark or white.

Greater gliders are marsupials, meaning they give birth when their young is still in an embryonic stage. The tiny hairless creature crawls into the mother's pouch and latches on to one of two teats. It first emerges from the pouch when it weighs about 5.29 ounces (150 grams.) It first clings to its mother's back, returning to the pouch for food and protection. It then begins foraging on its own. It is weaned when it is six to eight months old, but does not become sexually mature until two years of age. For an unknown reason, more females survive to breed than males.

Greater gliders are very clumsy on the ground and only at home in trees. They make burrows inside of dead spots in trees where the wood is softer. They line their burrows with leaves and strips of bark. They do not sweat like people or horses do. In order to cool off, they lick their fur and as the saliva evaporates, the animal cools. If lucky, a greater glider can live up to six years in the wild and 15 in captivity. Many greater gliders fall prey to dingoes, owls and domestic cats – a species not native to Australia.

The Greater glider, greater gliding possum is listed as Least Concern (LR/lc), lowest risk. Does not qualify for a more at risk category. Widespread and abundant taxa are included in this category, on the IUCN Red List of Threatened Species

Some facts about the
Greater gliding possum